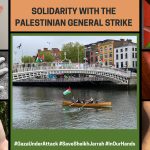 The Ireland-Palestine Solidarity Campaign sends solidarity greetings to Palestinians as they engage in an historic General Strike for Liberation across historic Palestine today, March 18 2021.

We salute the Palestinians in the occupied territories, including Jeursalemites, and the Palestinian citizens of Apartheid Israel who are engaging in a strike for freedom. This strike cuts across political divides, and unites the forcibly separated Palestinians in common action in their homeland.

Such strikes have a long history in Palestinians popular struggle – from the General Strike of 1936 against British imperialism to the weekly strikes during the first intifada against Israeli colonialism and apartheid.

The strike offers the opportunity for Palestinians, violently divided by Israeli colonialism and apartheid, to act in unity and solidarity with each other, and to push forward their freedom struggle on many fronts by engaging in economic, social and political disruption.

Against colonial violence and for liberation

Today’s strike takes place against a backdrop of horror.

In the past nine days more than 200 people have been killed in Israel’s ongoing assault on the people of Gaza. They include more than 60 children and 30 women, meaning that women and children make up nearly half of all the dead.

The historic General Strike will serve to cut across this latest escalation in colonial violence of the nuclear armed Apartheid State, and to give Palestinians a sense of hope and empowerment in their ability to take collective mass action.

Solidarity is important – action is necessary

In Ireland, we too stand in solidarity with our Palestinian sisters and brothers, and demand action from our government.

Minister Simon Coveney has said many of the right things. But words are empty without actions to back them up, especially when the United States continues to refuse to even call for a ceasefire, never mind sanctions on Apartheid Israel.

And there are many actions that Ireland can take, unilaterally.

The Occupied Territories Bill can be enacted to band trade with Israel’s illegal settlements in Palestine.

We can close the recently-opened IDA office in Tel Aviv.

We can support the calls from Palestinian civil society to have the UN investigate Israeli Apartheid.

We can end the involvement of our own police force with the Israeli Ministry of Public Security – the same ministry that is overseeing much of the violence directed towards Palestinians.

We can end the Irish arms trade with Israel.

And we can expel the Israeli Ambassador!

We call on the people of Ireland to escalate support for the Palestinian campaign for Boycott, Divestment and Sanctions (BDS), to hold our politicians to account, to demand action from our government, and to continue to show their beautiful solidarity with the people of Palestine until Israeli apartheid has ended and Palestinians enjoy freedom, justice, equality and the right to return!