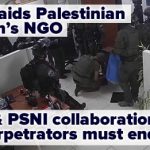 The raid was conducted Israel’s notorious Border Police unit, which operates under the command of the Ministry of Public Security. The Ireland-Palestine Solidarity Campaign sent the below letter to the Irish government, highlighting the ongoing collaboration between the Irish police force, An Garda Síochána, and the Ministry of Public Security through the EU-funded ROXANNE research programme. A similar letter was also sent to the Minister for Justice in the NI Assembly as the Police Service of Northern Ireland are involved in the same project.

You too can take action by sending a couple of quick emails at the link below! 👇

CLICK HERE TO TELL THE GARDAÍ & PSNI TO STOP COLLABORATING WITH ISRAELI APARTHEID!

I am writing on behalf of the Ireland-Palestine Solidarity Campaign (IPSC) to bring to your attention the recent raid by Israeli occupation forces on the offices of Defence for Children International – Palestine (DCIP), one of Palestine’s most respected independent human rights advocacy and legal representative organisations.

DCIP is the local affiliate of Defence for Children International, which has consultative status with the United Nations Economic and Social Council, UNICEF, UNESCO and the Council of Europe.

According to a statement from DCIP, at around 5.15am on 29th July 2021, members of the Israel Border Police broke into the organisation’s empty headquarters in Ramallah, where they “confiscated six desktop computers, two laptops, hard drives, and client files related to Palestinian child detainees represented by DCIP’s lawyers in Israel’s military courts.”

Thankfully, as no staff were present at the time of the raid they remain physically safe and free, although no reason was given for the raid, nor was any receipt of materials seized left behind. A full account of the raid, including video and photo evidence, can be accessed here.

Such raids on Palestinian civil society organisations by the Apartheid State of Israel are all too frequent. They have the triple aim of being intelligence gathering operations, attempts to intimidate human rights defenders, and to delegitimize the work of Palestinian NGOs and deter donors by insinuating they are ‘security threats’.

Israel’s actions in this regard are well documented, including most recently in a report by the International Federation of Human Rights (FIDH) entitled ‘Target Locked: The Unrelenting Israeli  Smear Campaigns to Discredit Human  Rights Groups in Israel, Palestine, and  the Syrian Golan.’

The Irish government must publicly condemn this, and other, attacks on Palestinian human rights defenders and legal representative organisations.

Furthermore, the involvement of the Israel Border Police should be of great concern to Irish authorities; An Garda Síochána is in direct collaboration in an EU funded project (ROXANNE) with Israel’s Ministry of Public Security, which oversees the operations of this notorious unit of the Israel Police. We have previously corresponded with both of your offices about this matter – including submitting a detailed dossier on the role of the Ministry. Hundreds of members of the Irish public have also made their concerns known to you.

We reiterate that it should be unconscionable for Ireland, a state that claims “respect for human rights and the promotion of human rights” as “a cornerstone of our foreign policy,” to allow its national police force to continue to act in collaboration with a ministry that oversees a vast array of daily human rights abuses and international law violations, including war crimes, and which is key pillar in the maintenance of what Human Rights Watch, B’Tselem, the Palestinian Human Rights Organizations Council, Yesh Din, and others call Israel system of apartheid in Palestine.

We look forward to your response, and to action from your respective ministries.

CLICK HERE TO TELL THE GARDAÍ & PSNI TO STOP COLLABORATING WITH ISRAELI APARTHEID!