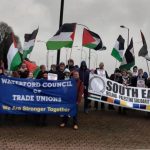 The Ireland-Palestine Solidarity Campaign (IPSC) warmly welcomes the passing of a motion by Waterford City and County Council that the Waterford Metropolitan District will twin with the Ramallah Municipality in Palestine.

We commend the work done by local activists in the South East branch of the IPSC to achieve this twinning which is another shining example of the unbreakable solidarity between the peoples of Ireland and Palestine.

The process of twinning is invaluable in that it builds links between communities in both localities and the IPSC South East members have forged strong connections between Palestinians and Irish schools, trade unions, youth groups, and sports clubs. As the Palestinian people continue to be subjected to brutal oppression and apartheid by the Israeli state, such acts of solidarity are crucial in demonstrating the support that there is in Ireland for their struggle for justice.

That the motion was co-signed by the entire council is very welcome and the fact that it also commends Dáil Éireann for taking a strong and unanimous stand in support of the Palestinian people is a reminder to the Irish government that it must take meaningful, concrete action to back up its recognition of ‘de facto’ Israeli annexation of the parts of the West Bank where illegal settlements have been built, to ensure that there is accountability for Israel for its crimes against the Palestinian people.

We in the IPSC look forward to seeing how this twinning between Waterford and Ramallah enriches the lives of both communities and are very heartened to know that representatives from other councils have been in touch with a view to doing the same in their own areas.