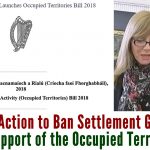 UPDATE 2 (31st Jan 2018): Unfortunately the bill was debated but not voted on, and a vote has been adjourned until sometime before July. It is worth noting that it was supported by Sinn Fein, Labour and many independent Senators, but opposed by the main government party Fine Gael and largest opposition party Fianna Fáil.

Despite welcoming the strong and unequivocal condemnation of illegal Israeli settlements by all contributors to the debate, including the Táiniste and Foreign Minister Simon Coveney, we believe the failure of the Seanad to pass this bill at this juncture is, sadly, merely a prescription for more of the same old inaction when it comes to Apartheid Israel’s decades-long occupation and colonisation of Palestine and oppression of its people.

We urge everyone to keep putting pressure on politicians to support the bill in the meantime.

UPDATE: This is a unique opportunity for Ireland to be at the forefront of ensuring international law is respected and states do not profit from the occupation of other countries. It is imperative that people use this rare opportunity to lobby Senators and local TDs (especially Fianna Fail reps). Note that we have been informed that the vote has been moved forward to TUESDAY 30th January to be debated between 4.45-6.45pm.

On top of the talking points outlined below, now is the time to politely remind Fianna Fail representatives that their party officially “supports the EU ban on illegal settlement goods,” and to point out that given that Tanaiste has said just this week that there is no reasonable prospect of agreement on such a ban at EU level, and that it is clear that Ireland has the capacity to overtake EU inaction in order to spearhead such a change instead, surely the Fianna Fail party will back this Bill to bring it to the next stage in the Seanad?

In addition to contacting Seantors (see below), please take a few minutes to email or preferably call your local Fianna Fail TD(s) and the Fianna Fail head office (01 – 676 1551 / info@fiannafail.ie) on Monday to politely impress upon them how important this Bill is.

An historic opportunity for Ireland to set a European precedent in respect of international law has presented itself thanks to the work of Sen. Frances Black, Trocaire, Christian Aid, the Irish Congress of Trade Unions and others. The Occupied Territories Bill 2018, which will be voted on in the Seanad on Wednesday January 31st sometime before July 2018, seeks to prohibit the import and sale of goods, services and natural resources originating in illegal settlements in occupied territories. Such settlements are illegal under both international humanitarian law and domestic Irish law, and result in human rights violations on the ground. Despite this, Ireland provides continued economic support through trade in settlement goods.

You can be sure that well-oiled Israel lobby groups are working hard to ensure this bill is defeated, so it is imperative that all supporters of Palestinian rights take ten minutes to write to all Senators to ask them to support this Bill, which seeks to have Irish domestic law fall in line with international law when it comes to the trade in stolen goods and the proceeds of illegal activities. This Bill can help end the international crimes of acquisition of territory by force and the colonisation of occupied lands.

A model letter template can be found here (Google Docs) or here (MS Word format), and below are some key issues to mention to Senators – but please if you have time write your own email or letter, or better yet, make phone calls; 50 individualised letters are worth 200 copied and pasted letters.

A full list of Senators email addresses and contact numbers for can be found here (Google Docs) or here (MS Excel format).

Please note that Sinn Féin, Labour and Green Party Senators have already pledged to support it, along with the Seanad Civil Engagement Group Senators Frances Black, Alice-Mary Higgins, Lynn Ruane, Colette Kelleher and John Dolan, as well as Senator David Norris. It is likely that Fine Gael Senators will vote as a block against it, so please, especially if you are calling, focus on those who are still on the fence – namely Fianna Fail and the Undecided Independents.

We urge you all to take the time to write or call Senators to encourage them to vote for this historic Bill.