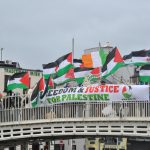 To commemorate the 11th anniversary of the Israeli ‘Operation Cast Lead’ attack on Gaza, and to highlight Israeli’s ongoing brutality coupled with the cruel and illegal siege of Gaza, the Ireland-Palestine Solidarity Campaign (IPSC) is calling on people to gather on Tuesday 31st December at one of our nationwide annual New Year’s Eve vigil for the people of Palestine.