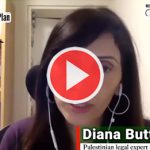 To mark Nakba Day 2020, on Wednesday 13h May the Ireland-Palestine Solidarity Campaign was honoured to host an online public meeting with Palestinian legal expert and political analyst Diana Buttu.

Diana Buttu is a Ramallah-based lawyer, analyst and commentator, a former legal advisor to Palestine Liberation Organization, and Policy Advisor to the Palestinian thinktank Al-Shabaka.