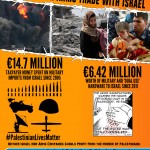 The Ireland-Palestine Solidarity Campaign (IPSC) is calling on the Irish government to place an immediate arms embargo upon the state of Israel. We’re also asking our members and supporters to take action to help.

Aside from signing our online petition, we would like people to send letters and emails to the Minister for Foreign Affairs, Charlie Flanagan TD, and their local TDs and MEPs asking them to support the call for an arms embargo on Israel.

Below you will find a sample letter, but it’s always better to write your own. The Minister can be contacted at charles.flanagan@oir.ie – and you can easily contact your local TDs and MEPs using the brilliant Contact.ie website here.

I am writing because I am shocked and concerned to learn about Ireland’s arms trade with Israel.

According to the government’s own figures, Ireland has bought €14.7m worth of arms and military components from Israel over the last decade, while Irish-based companies have exported €6.42m worth of military and ‘dual use’ hardware to Israel since 2011. Meanwhile, Israel has killed over 9,000 Palestinians, including 2,060 children since 2000.

Military items exported from Israel will have used Palestinians as ‘human test subjects’ so such weapons can be marketed as ‘battle proven’. Any military components exported to Israel will be used to kill and maim yet more Palestinians and to entrench the decades-long military occupation.  Neither Israel nor arms manufacturers in Ireland should be allowed to profit from the killing of Palestinians; this trade in death must end. I ask you to support the call from the Ireland-Palestine Solidarity Campaign for the government of Ireland to end the Irish arms trade with Israel, and for it to advocate for an international arms embargo at EU and UN levels until Israel ends the occupation of Palestinian land and complies fully with its obligations under international law.

This trade in death is a shame and a stain upon our state. While it may be ‘legal’, it is nevertheless of the utmost moral repugnance. It is time to end it.