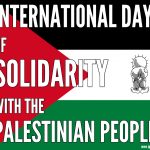 Today, November 29th, is International Day of Solidarity with the Palestinian People, and we in the Ireland-Palestine Solidarity Campaign (IPSC) send greetings of solidarity from Ireland to Palestinians everywhere as they struggle for their freedom and self-determination.

The UN chose this day, 29th November, to mark the shameful day in 1947 when the UN voted to partition Palestine against the wishes of the indigenous people – an act that would lead to the ethnic cleansing of over 750,000 Palestinians during the Nakba (catastrophe) between 1947 and 1949. 70 years on, Palestinians continue to suffer the disastrous consequences of that imperial decision to allow the colonisation Palestine.

Over seven decades Israel has colonised ever more Palestinian land. It routinely kills, maims and imprisons Palestinian, including children, as part of its brutal military occupation of the West Bank and Gaza. It rules over millions of Palestinians using a system of colonial apartheid, and denies millions more refugees their right to return to their homes. And for all of this, it has enjoyed relative impunity. Western governments, including the Irish government, have refused to take any concrete meaningful action to punish Israel for its myriad crimes.

Today is also the 16th birthday of the IPSC, and we believe that the global Boycott, Divestment and Sanctions (BDS) movement is the best way that internationals – and Palestinians in the Diaspora – can contribute to helping achieve Palestinian freedom.

The BDS movement has been under attack around the world as Israel and its allies and appendages seek to strangle this growing and effective nonviolent movement for Palestinian rights.

We cannot, and will not, allow them to succeed. We must build the BDS movement in Ireland, to stand as an example for other countries in Europe, North America and beyond – especially those with significant Irish populations.

The renowned and outspoken Irish artist Robert Ballagh tells of the time he met Nelson Mandela in Dublin, and asked him what role the boycott of apartheid South Africa played in the end of apartheid there.

Nelson Mandela told him that “the boycott was one of the important weapons in the struggle against apartheid.”

As it was then, so it is today. We ask you to join us in the BDS movement for freedom, justice, equality and a true peace for the Palestinian people.