The Wall has been in construction since 2002, and when finished, will be 721km long. 10% of West Bank land will be physically separated by the Wall between the “Green Line” (the internationally recognised 1949 armistice line) and the Wall. Only 20% of the Wall’s route follows the “Green Line”, 80% encroaches into West Bank territory. At its deepest, the route of the Wall stretches 45% into the width of the West Bank (to incorporate the Ariel and Ma’ale Adumim settlement blocks onto the Israeli side). According to B’Tselem, an Israeli human rights NGO, 497,820 Palestinians are directly affected by the Wall, and the UN claim that more than half a million Palestinians live within 1km of the Wall.

The Wall has proven to be highly controversial and its construction has been condemned by Palestinians groups, Human Rights organisations and various International organisations, and declared illegal by the International Court of Justice. Criticisms of the wall centre on its route, stating the fact that the Wall verges deep into Palestinian territory, and as such has been accused as a land grab. The Wall’s route incorporates the major Israeli settlement blocks in the West Bank onto the Israeli side, as well as some of the West Bank’s most fertile land. 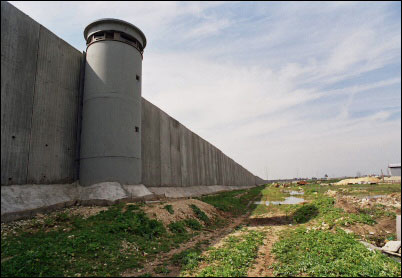 The Wall at Qalqilya, 8m high, completely encircles a town of 30,000 people.

The International Court of Justice

“…Israel …has the obligation to cease forthwith the works of construction of the wall being built by it in the Occupied Palestinian Territory, including in and around East Jerusalem …[C]essation of those violations [of its international obligations] entails in practice the dismantling forthwith of those parts of the structure…The Court finds further that Israel has the obligation to make reparation for the damage caused to all the natural or legal persons concerned.”

The ICJ decision also noted, whilst understanding “the assurance given by Israel that the construction of the wall does not amount to annexation and that the wall is of a temporary nature”, that the Wall could create an irreversible “fact on the ground” that would essentially be annexing Palestinian land.

“The construction of the wall and its associated regime create a ‘fait accompli’ on the ground that could well become permanent, in which case and notwithstanding the formal characterization of the wall by Israel, it would be tantamount to de facto annexation”

According to UN special rapporteur for human rights in the Occupied Palestinian Territories, John Dugard, “It is highly arguable that this stage has now been reached. The prohibition of the annexation of territory by force is, of course, one of the most fundamental principles of international law.”

The advisory opinion also declared that all states were under an obligation not to recognise the illegal situation resulting from the Wall’s construction, and that all states that are high contracting parties to the Fourth Geneva convention were obliged to ensure that Israel complies with the provisions of that Convention. The ICJ decision confirmed that the Fourth Geneva Convention applied to the Occupied Palestinian Territories, and also confirmed the status of the settlements as contravening international law.

“All States are under an obligation not to recognize the illegal situation resulting from the construction of the wall and not to render aid or assistance in maintaining the situation created by such construction; all States parties to the Fourth Geneva Convention relative to the Protection of Civilian Persons in Time of War of 12 August 1949 have in addition the obligation, while respecting the United Nations Charter and international law, to ensure compliance by Israel with international humanitarian law as embodied in that Convention”