The Irish Congress of Trade Unions (ICTU) — representing trade unions and trades councils from the whole island of Ireland — have passed two motions on Palestine that are extremely critical of the actions of the Israeli government in its oppression of the Palestinian people. The two motions condemn Israel for its human rights abuses, its policy of ethnic cleansing and its war crimes. The motions include a commitment to “actively and vigorously” promote a policy of boycott and of divestment, to make direct representations to government and to the EU, and to mobilize EU-wide trade union solidarity action. Conference also called upon ICTU to send a senior delegation to the Palestinian territories to establish solidarity links. It also welcomed the establishment by ICTU of Trade Union Friends of Palestine.

Aosdána, the academy of artists sponsored by the Irish state, has passed the following resolution:

“Mindful of the 4th August 2006 call from Palestinian Filmmakers, Artists and Cultural workers to end all cooperation with state-sponsored Israeli cultural events and institutions, Aosdána wishes to encourage Irish artists and cultural institutions to reflect deeply before engaging in any such cooperation, always bearing in mind the undeniable courage of those Israeli artists, writers and intellectuals who oppose their own government’s illegal policies towards the Palestinians.” 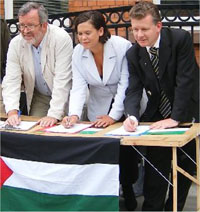 On 11 July, the IPSC submitted, to the Irish Department of Foreign Affairs, a collection of petitions which demand action on the 9 July 2004 finding of the International Court of Justice regarding the Israeli wall in the West Bank.

Just before, elected representatives, from several political parties, signed petitions to be added to those brought by the IPSC. Pictured above are

Is Israel imposing apartheid on the Palestinian people?

Rev Dr Eoin Cassidy, a member of the Irish Commission for Justice and Social Affairs, criticises Israel’s legal treatment of Palestinians and its policies in relation to the West Bank and Jerusalem (Irish Times, 29 December 2006)

A letter signed by 61 Irish academics, published in the Irish Times (16 September 2006)

Segregation wall strangles the life out of Bethlehem

An article by Prof. John Kelly, the former registrar of UCD, the largest university in Ireland, published in the Irish Times (24 June 2006)

An article by Prof. Justin Keating, a former government minister, published in The Dubliner (November 2005)

Statement by European Delegation to Israel and Palestine

Between 22 and 28 August 2005, a high-level EU delegation, including Michael D. Higgins from Ireland, made a fact-finding visit to Palestine/Israel. Read the statement they issued at the end of their visit. (28 August 2005)

What I saw in Palestine

A statement by Tony Gregory, TD, on what he saw when, with four other members of the Dáil (the Irish parliament), he visited the Occupied Territories in early June 2005