Background to the Palestinian freedom struggle 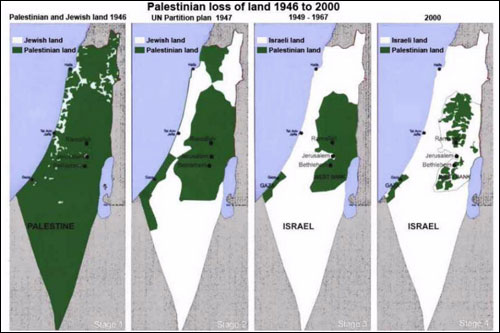 In 1850 Palestine was populated by Arabs, 400,000 (80%) Muslims, 75,000 Christians, 25,000 Jews and a small Druze population. For centuries they had lived in harmony. In the late 1800s, in response to discrimination and violence against them some European Jews decided to establish a Jewish state and investigated a number of different countries before choosing Palestine. These colonisers became known as Zionists.

At first the influx of small numbers of Zionists into Palestine created no problems. As more and more Zionists arrived — many with the express intention of establishing a Jewish state — the indigenous population became alarmed. This eventually gave rise to escalating waves of violence.

After World War II the fledgling UN, dominated by the USA and the UK, recommended partitioning Palestine. Although Jews constituted only one-third of the population and owned less than 7 percent of the land, the UN recommended ceding 56 percent of Palestinian land to a Jewish state, against the wishes of the indigenous Palestinian majority.

In November 1947 the UN General Assembly passed its partition resolution. In March 1948, Zionist terrorists began a pre-planned, brutal campaign of ethnic cleansing forcing Palestinians from their land in order to create a Jewish majority. Over 750,000 Palestinians were forced from their homes, farms and villages by Zionist terrorists – 250,000 of them before the declaration of the state of Israel – and became refugees.

On 15th May 1948 the British Mandate ended and the State of Israel came into effect with no defined borders. The armies of Egypt, Transjordan (Jordan), Syria, Lebanon, and Iraq joined Palestinians to resist Zionist plans for the conquest of Palestine, but were defeated.

In 1967, Israel invaded the West Bank and Gaza, an area with an Arab population of about 1.5 million. This resulted in the dispossession of a further half a million Palestinians. In 1983, Israel invaded Lebanon. Tens of thousands were killed and made homeless in the wake of the invasion which culminated in the massacres of Sabra and Shatilla.

In December 1987, a mass uprising against the Israeli occupation began (the Intifada). Israeli forces reacted with force causing mass injuries and heavy loss of life among the civilian Palestinian population.

However Israel continued its policies of land confiscation and house demolition, doubling the number of illegal colonies on Palestinian land.

In 2002, the Israeli government began construction of the apartheid Wall, demolishing more homes and confiscating even more Palestinian land. In 2004 the International Court of Justice declared the wall illegal.

In 2005 Israel withdrew its illegal settlers from Gaza while tightening its stranglehold on the territory.

In January 2006, Hamas won the Palestinian elections. Israel, the US, and the EU refused to recognise the democratically elected government. The EU and USA cut off aid and Israel withheld taxes from the Palestinian Authority.

In 2006, Israel attacked Lebanon and Gaza killing nearly 2000 people, the vast majority of whom were civilians. Amnesty International described Israel’s actions as “serious violations of international human rights and humanitarian law, including war crimes”. The EU took no action against Israel. Britain and America facilitated the rapid rearming of Israel as it bombed civilian neighbourhoods and decimated the infrastructure of Lebanon and Gaza.

In the first six months of 2007, Israel killed 117 and injured 299 Palestinians. Internal pressures, exacerbated by the impact of the Israeli siege of Gaza and the withholding of aid and taxes resulted in Fatah taking control in the West Bank and Hamas in the Gaza Strip. Tony Blair was appointed envoy to the Middle East Quartet.