From the first of July the government of Israel is planning to bring forth legislation to unilaterally annex Israel’s illegal settlements and the Jordan Valley region of the Palestinian West Bank. This constitutes an area of roughly 30% of the West Bank, and will be in addition to Israel’s already illegal annexations of Palestinian East Jerusalem and the Syrian Golan Heights.

This is an attempt to re-partition Palestine, and represents the latest phase in the ongoing Nakba endured by the Palestinian people.

The annexation plan eliminates whatever diminished prospect still exists of achieving a viable sovereign independent state. In its place, Palestinians will find themselves inhabiting a corralled entity that constitutes just 15% of historic Palestine and with their inalienable rights to human, social and economic development totally controlled by Israel’s continued military rule. In short, the occupation of Palestine will continue under another name without even the minimum protections supposedly guaranteed under the Fourth Geneva Convention. Palestinians in the West Bank will ‘legally’ become a subject population without hope of the right to a decent life or meaningful sovereignty, as has been the situation in Gaza since 2005.

This is neither a recipe for peace, nor for justice; it is the recipe for the continuation and escalation of jaw-dropping racist injustice and degradation of human rights attended with periodic massacres –what Israeli politicians call ‘mowing the lawn’. Just as was the case with South African Apartheid, no politician of integrity  would ever accept this or abandon a living people to this virulent exploitative racist reality.

Will Ireland stand with the bully or the victim?

Ireland, in collaboration with the international community, has a choice to make – to stand with the victim or side with the bully. It is to be welcomed that Tánaiste Simon Coveney has put on the record Ireland’s opposition to Israel’s proposed annexation:

Annexation of territory by force is prohibited under international law, including the UN Charter, whenever and wherever it occurs, in Europe’s neighbourhood or globally. This is a fundamental principle in the relations of states and the rule of law in the modern world. No one state can set it aside at will.

It is also welcome that he added that Israel must “be very clear about the gravity of any such step.” However, as forceful as this may sound, without detailing any concrete measures Ireland is prepared to take to defend Palestine’s people and international law, the Tánaiste may as well have saved his breath. Neither Palestine’s people nor international law need any more rhetorical affirmation. Rulings, resolutions and reports on the illegality of Israel’s settlement project, its previous annexations, and its daily illegal practices in Palestine are stacked high and are all similarly ignored when it comes to giving practical effect to them. Indeed, neither Tánaiste Coveney nor his party will even allow the implementation of the very limited protections afforded in the recently passed Occupied Territories Bill.

This, let’s be clear, is how bullies get their way. This accountability and enforcement gap has indeed been highlighted by countless political, legal and humanitarian reports into Israel’s record of criminality.

In the words of Palestinian President Mahmoud Abbas in his address to the UN in General Assembly in 2012:

What permits the Israeli Government to blatantly continue with its aggressive policies and the perpetration of war crimes stems from its conviction that it is above the international law and that it has immunity from accountability and consequences. This belief, unfortunately, is bolstered by the failure by some to condemn and demand the cessation of its violations and crimes and by positions that equate the victim and the executioner.

Several EU member states warned and “strongly advised” against Israeli annexation of Palestinian land in the West Bank … [ These] condemnations follow a familiar pattern of weak statements being issued whenever the Israeli regime breaches international law, with no threat of repercussions. Indeed, committing war crimes is always an Israeli decision, and the response of the international community is always to ignore them.

Indeed, international law states quite categorically that states and individuals should be held accountable for grave breaches of human rights and international law – accountability that Israel flagrantly and contemptuously dismisses.

An illustration of just how contemptuous Israel is of the agreed standards of international law is afforded by its reaction to Palestine’s accession to the International Criminal Court in 2015. Following this, Israeli Prime Minister Netanyahu announced that Israel would construct a further 3,000 settler housing units in the Occupied Palestinian Territories as a way of punishing Palestine for seeking the protections of international law. As EU and US protests rolled in, Netanyahu brushed them aside: “Israel will continue to stand by its vital interests,” he declared, “even in the face of international pressure, and there will be no change in the decision that was made.”

In other words, Israel will do what it likes, when it likes – and will do so until there are adverse political and economic consequences implemented by third states.

Notwithstanding Tánaiste’s Coveney’s avowal that no state can set aside the fundamental principles and practices of international law at will, Israel already has done just so on many occasions – and will again on this occasion.

As United Nations Special Rapporteur on Human Rights in the Occupied Palestinian Territories, Michael Lynk stated in a letter to the Irish Times this week:

That Israel is on the cusp of striking such a major blow to the right of the Palestinian people to self-determination is a direct consequence of decades of failure by the international community to employ the tangible and plentiful legal and political tools at its disposal to end this injustice.

This failure is not only moral and political in nature; it also amounts to an abdication by the international community and its member states to uphold their legal duty to take all measures necessary to demand respect by Israel of its solemn obligations under international law.

Ireland has an important role to play 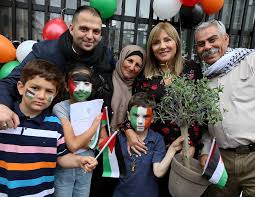 Ireland is a state held in high regard internationally and can – indeed, must – play a leading role in advocating for a new direction in international relations with Israel. There are important and practical steps which the Irish government can take right now.

Firstly, in order to meet its mandatory duties  of non-recognition of and non-assistance to serious breaches of international law, the Irish government is obliged to ban trade with Israel’s illegal settlements, as allowing such entities to trade freely and profit from the occupation violates these duties. The next Irish government must fully support the passage into law of the Occupied Territories Bill to ban all such trade with the settlements – this is an action that can be taken at the literal stroke of a pen.

Indeed, UN Special Rapporteur Lynk has stated “It is my fervent hope that a new Irish government would take the final steps to legislate the Bill into law, and demonstrate the leadership on this issue that the world has been sorely lacking.” The next government should heed this call, and listen to the countless voices in Ireland that support this legislation.

The Irish government should also be publicly raising its voice within the European Union – where a similar hypocritical complacency reigns – pushing strongly for an EU-wide ban on trade with illegal settlements, the ending of all EU funding to entities complicit in the illegal settlement enterprise, and the cessation of all EU research grants to Israeli companies involved in the arms industry.

We believe the next Irish government must also drastically reassess the state’s ever deepening relationship with Apartheid Israel. The question must be asked as to how Ireland can continue to call itself “a friend and partner of Israel”, as the Tánaiste did last week, when that state refuses to end its serious breaches of international law and human rights violations, and in fact doubles down on them and thumbs its nose at the international community. Are these really the ‘friends and partners’ that Ireland wants or needs?

What is clear is that the current situation of meek condemnation coupled with total inaction while Israel imprisons millions of Palestinians under a system of racist apartheid and vicious colonial brutality, and keeps millions more in enforced exile, cannot be allowed to continue.  If Ireland, the EU, and the wider international community are serious about their professed commitments to the primacy of human rights and the rule of law, the time to act is now.

Finally, we call on the people of Ireland to continue and intensify their widespread support for the global Palestinian-led Boycott, Divestment and Sanctions (BDS) Movement, and to increase public pressure on politicians to support and implement concrete measures that can hold Israel to account for its decades of oppression and dispossession of the Palestinian people. 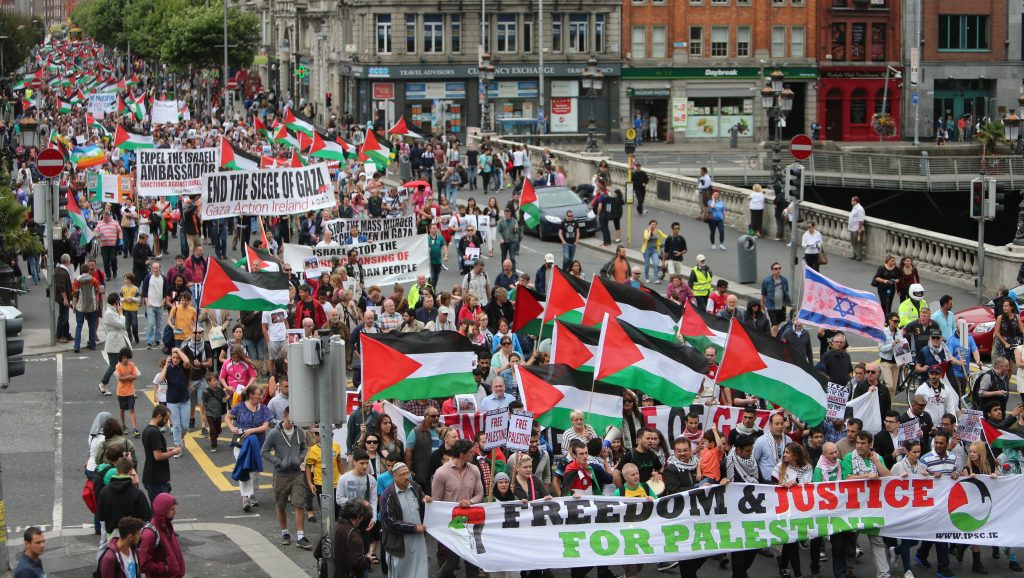 After Annexation: A New Reality

Despite the fact that what Israel is proposing to do now is flagrantly illegal, wholly unjust, and starkly contradicts the supposed agreed international commitment to the ‘two state solution’, Israel feels emboldened to show its contempt for the international community because it has the complete backing of US President Donald Trump. The respect the current US administration affords international law generally and Palestine specifically is evident in the disregard with which Secretary of State Mike Pompeo dismissed concerns regarding Israel’s illegal plan: “As for the annexation of the West Bank, the Israelis will ultimately make those decisions. That’s an Israeli decision.”

This quite obviously is a return to the philosophy of ‘might equals right’, where the strong dominate the weak, and it heralds the arrival of a new period of international lawlessness. However, whilst this may, for the moment, seem abstract to us in Ireland, this new world disorder will be all too real to the people of Palestine.

For Palestinians, the reality of Israel’s annexation and re-partition will be unrelenting racial discrimination, dispossession, colonial violence and apartheid without hope of independence or freedom. It will definitely mark the end of the era of the internationally endorsed two state solution. 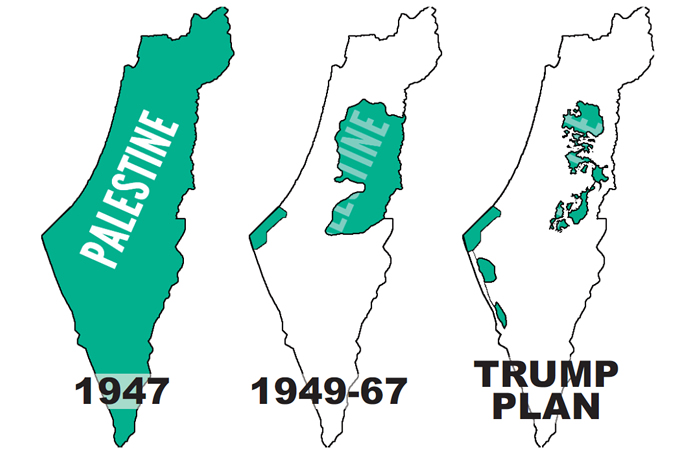 Whilst the Palestinian leadership will have to grapple with what that means with regard to the strategy they have followed of international engagement in line with the framework of 2003’s Road Map For Peace; Ireland too will have to engage with the obvious reality that the peace process is dead – and is deliberately dead due to intransigence and belligerence of a racist Israeli government that favours ethno-religious supremacy over Palestinian self-determination.

In the new one state reality, where Israel has seized the land, air, water, sea and border rights of the Palestinian people for the benefit of a state that according to Prime Minister Netanyahu is not state of all its citizens but solely of its Jewish citizens; that openly encourages incitement against its non-Jewish citizens never mind its Palestinian non-citizens; and whose Prime Minister openly declares the votes of Palestinian-Arab Israeli citizens don’t count, it will be incumbent upon all states to recognise Israel for what it is – a de facto racist apartheid state – and take all necessary measures appropriate, including boycott, sanctions and divestment, to ensure that this injustice does not endure, and that Palestinians fully enjoy the justice, equality, self-determination and freedom from colonial oppression that are their inalienable rights.

Israel’s regime of vicious, racist and colonial apartheid must end, just as its South African counterpart’s did.