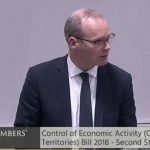 The Ireland-Palestine Solidarity Campaign (IPSC) expresses disappointment with last night’s failure by the Irish Seanad to pass the Occupied Territories Bill, which seeks to stop Irish trade with illegal settlements in occupied territories. The bill, sponsored by Senator Frances Black, and supported by Sinn Fein, Labour and independent Senators, but opposed by the main government party Fine Gael and largest opposition party Fianna Fáil, failed to pass its second reading, and a decision was taken to adjourn a vote until sometime before July. We urge everyone to keep putting pressure on politicians to support the bill in the meantime.

Despite welcoming the strong and unequivocal condemnation of illegal Israeli settlements by all contributors to the debate, including the Táiniste and Foreign Minister Simon Coveney, we believe the failure of the Seanad to pass this bill at this juncture is, sadly, merely a prescription for more of the same old inaction when it comes to Apartheid Israel’s decades-long occupation and colonisation of Palestine and oppression of its people.

Several speakers who opposed the bill repeatedly referred to the need for coordinated EU action. While such action would indeed be welcome, it ignores the fact that the EU’s record of engagement with Israel is overwhelmingly one of rewarding it through free trade agreements, joint projects, access to EU funds and other perks, even in the face of Israel’s continued and flagrant international law and human rights violations.

During the debate, repeated overtures were made towards the failed peace process and the two state solution. The Táiniste even made the outlandish remark that he believes that the Israeli Prime Minister is serious about achieving peace and a Palestinian state, which flies in the face of Benjamin Netanyahu’s constant pronouncements on the matter and the actions of the government he leads.

Others spoke of the need for ‘balance’ – as if there can be any comparison between those who build illegal settlements and those whose land those colonies are illegally built on and whose resources they steal.

Palestinians, quite frankly, do not have the luxury of time to wait around for the EU to change its traditional stance toward Israel – already in the month of January, Israel has killed 6 Palestinians, four of them children, most recently yesterday’s murder of 16-year-old Layth Abu Naim in al-Mughayir village. Over six thousand political prisoners languish in the occupation’s prisons, including more than 350 children. Gaza remains under illegal siege and is constantly on the brink of humanitarian disaster, the lack of supplies and electricity punctuated only by near-daily Israeli ceasefire violations. In the West Bank and Jerusalem, illegal settlement expansion continues apace and illegal annexations appear to be looming.

The EU has continually failed the Palestinian people; yesterday evening Ireland had a chance to help finally overcome that failure. Sadly, it seems we too have let them down.

If passed, the bill would have made Ireland a world-leader as regards observance of international law, and would have helped to ensure that states do not profit from the occupation of other countries. It would have set an important precedent that would back up the Irish state’s words of condemnation with concrete actions when it comes to stopping profiteering from stolen land and resources.

Products from illegal settlements, whether in occupied Palestine or elsewhere, including industrial and agricultural zones, or those natural resources extracted from occupied territories, are the proceeds of international crimes. Unfortunately. by failing to pass this bill, the Seanad has ensured that Ireland will continue to be a receiver of what amount to stolen goods. We hope that when the bill returns to the Seanad floor later this year, those who opposed in last night’s debate will have been convinced that it is the right, just and most effective way for Ireland to proceed in the quest for justice for Palestine and other occupied countries.

We would like to extend our gratitude to all the Senators who voiced support for the bill, especially Frances Black for tabling it, to Sadaka, Trocaire, Christian Aid, and the Irish Congress of Trade Unions for all their hard work on the bill, and to all those supporters of Palestinian rights who contacted political representatives in advance of the vote.