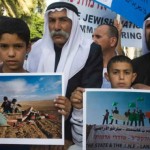 Statement by the ECCP, Brussels, 12th July 2013: The Israeli government is expecting the Knesset to pass a law regulating the resettlement of Bedouins in the Negev, by which tens of thousands of Bedouins will be expelled from their homes, villages and lands, and concentrated in several more townships to be founded at sites of villages recognized for this purpose. Under the Prawer Plan it is estimated that some 30,000 to 40,000 people in at least 25 of the unrecognized Bedouin villages would be forcibly relocated. This is the largest attempted eviction of a native Palestinian population by Israel in decades. At the end of the process, all remaining Bedouin land claims will be erased from the state record.

The Prawer Committee did not adequately consider the people affected by the plan and failed to seriously consider alternatives; also the plan constitutes unlawful racial discrimination with regards to land, planning, provision of government services, and the criteria for establishment of towns between Arabs and Jews in the Negev. It ignores many Bedouin villages’ historic ties to their lands and the fact that other villages were established in their present locations in the 1950s after the Israeli government forcibly relocated them there.

The plan disregards Bedouin property rights and fails to recognize Bedouin land ownership and violates residents’ rights to due process and rights to appeal against eviction and demolition orders. Making more of the Bedouin population move into impoverished urban slums against their will where there are few economic opportunities will further entrench cycles of poverty.

The Bedouin leadership and civil and human rights groups reject the Prawer plan. They demand the villages be recognized and that the local population be included in the process of drafting new zoning plans as no Bedouin citizens were consulted in the process that led to the plan. They also point to the fact that the government encourages Jews to move south, especially to agricultural settlements, all the while aiming to destroy Arab villages that in some cases predate the creation of the state. The government is currently planning 10 new settlements for Jews in the Negev.

We must also emphasize that, despite the ecological and environmental argument that is used for this purpose (planting forests, making the desert bloom), the central role that the JNF (Jewish National Fund) plays is to be an actor of the dispossession. As resisting Palestinian Bedouins use to say, « every KKL (JNF) tree is a soldier of the State. »

The Arab Higher Monitoring Committee and the Regional Council of Unrecognized Villages are waging a campaign against the Prawer plan.

Despite intense local and international criticism, the Israeli coalition government has listed the passage of the Prawer-Begin Bill as one of its top priorities, and following the first reading, the bill will now be sent to the Committee for Interior Affairs and Environment to be prepared for the second and third readings. This bill may become law before the closing of the Knesset session at the end of July 2013.

Discrimination related to access to land, government allocation of state land, and provision of social services are prohibited under all international human rights treaties ratified by Israel. Raquel Rolnik, the UN Special Rapporteur on the Right to Adequate Housing, categorized the Prawer Plan as the “new frontiers of dispossession of traditional inhabitants, and the implementation of a strategy of Judaization and control of the territory.”1

The UN Committee on the Elimination of Racial Discrimination recommended that Israel “should withdraw the 2012 discriminatory proposed Law for the Regulation of the Bedouin Settlement in the Negev [the Prawer Plan Law], which would legalize the ongoing policy of home demolitions and forced displacement of the indigenous Bedouin communities.”2

The European Union (EU) has expressed its concerns about it a number of times, including in the 2013 European Neigbourhood Policiy (ENP) progress report and in a resolution of the European Parliament (EP) of 5 July 2012.

The European Coordination Committee for Palestine condemns the approval of the discriminatory Prawer-Begin Bill, which passed its first reading in the Israeli parliament (Knesset) on Monday 24 June 2013.

The unrecognized Bedouin villages should be able to remain on their land which covers less than five percent of the area of the Negev. The EU must use all means at its disposal – including political and economic pressure and sanctions – to prevent a forced displacement and evictions of Bedouins from Negev.

If, as regularly reminded in EU statements, the EU is committed to peace in the Middle East, it must intervene and use all its leverage, and in particular the Association Agreement, to send a firm and clear message to Israel: if the Israeli government wants to maintain its partnership with the EU, it must comply with EU norms, values and law. Otherwise, this partnership must be adjourned.

Statement by the European Coordination Committee for Palestine (of which the IPSC is an affiliate), 12 July 2013, first published here.