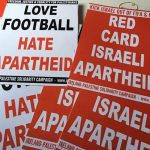 The Ireland-Palestine Solidarity Campaign (IPSC) reiterated calls for the cancellation of the away leg of the match between the Irish and Israeli U-21 teams, and for the expulsion of the Israeli FA from FIFA and UEFA due to Israel’s ongoing human rights abuses against the Palestinian people, including Palestinian sportspeople. The match is due to be played in Tel Aviv on 11th October, and when the home leg was played in Tallaght last year, the IPSC held a protest outside.

We encourage our supporters to sign the following petition calling for the cancellation of the game and to write to or tweet at the FAI.

The below letter was sent by the IPSC to John Delaney, CEO of the Football Association of Ireland.

I am writing to you on behalf of the Ireland-Palestine Solidarity Campaign (IPSC) calling on the FAI to cancel its Under-21s match against Israel on October 11th. The IPSC held a protest at the home fixture last year where we highlighted the Palestinian Boycott, Divestment and Sanctions (BDS) call for the expulsion of the Israeli FA from FIFA and UEFA due to Israel’s ongoing human rights abuses against the Palestinian people, including Palestinian sportspeople.

That protest and this letter are peaceful acts of solidarity with the people of Palestine who have suffered so much, and continue to suffer daily, at the hands of the Israeli apartheid regime.

This year marks 70 years since the Nakba (catastrophe) of 1948 when over 750,000 Palestinians were ethnically cleansed from their land and homes by Israel. Millions now languish in refugee camps, denied their legally guaranteed right to return. The Palestinian people are subjected to military occupation, siege and apartheid by Israel; indeed, there are over 65 racist laws discriminating against Palestinian second-class citizens of the Israeli state itself and of the Occupied Palestinian Territories. Furthermore, among its numerous crimes against humanity, Israel’s forces have killed more than 2,000 Palestinian children, wounded 13,000 and jailed 12,000 since 2000. In March 2017 a report published by the UN’s Economic and Social Commission for Western Asia (ESCWA) concluded that “Israel has established an apartheid regime that dominates the Palestinian people as a whole.”

Since the Palestinians in Gaza started their Great March of Return, weekly protests calling for their legally guaranteed Right of Return as refugees, six months ago, Israeli forces have killed at least 180 people and wounded more than 18,000. Among those killed are children, paramedics and journalists. Among the injured are hundreds of youths should have suffered amputations, many of them with dreams to play sport.

This summer, a group of children from Al Helal Football Academy in Gaza who have been hosted here for two years by our colleagues in Gaza Action Ireland, and who have played junior teams all over the country and been hosted by League of Ireland clubs, were prevented from leaving Gaza by Israel’s siege.  Their story is just one example of countless of Israel’s attempts to destroy Palestinian sporting opportunities.

While some people may suggest that sports and politics shouldn’t mix, we believe there is no place in sport for racism or teams who act as ambassadors for racist or apartheid states. You may be aware of the numerous attacks on Palestinian football by Israel, ranging from physical violence against players, to bombing of stadiums, to the routine hindering of players travelling to tournaments and even to training, to name but a few. Furthermore, although it is against the laws of FIFA to forcibly use the land of another country, Israel has established six clubs on occupied Palestinian land in its illegal settlements. This clear breach of both FIFA and international law must not be any longer accepted by the federation.

There is precedent for cancelling fixtures against Israel, as in June this year the Argentinean national team cancelled their match there, following appeals from Palestinian athletes and human rights campaigners and peaceful protests by activists around the world. In the words of Argentina’s striker Gonzalo “Pipa” Higuaín, “Not going was the right thing to do.”[1]

As Mahmoud Sarsak, the rising Palestinian football star who was abducted on his way to training, imprisoned without charge or trial by Israel, and who only won his freedom after a career-ending 96 day long hunger strike, has said: “There can be no place in football for segregation and oppression … I call on all those who spoke out for my release and the release of the Palestinian hunger strikers, to once again show their commitment to justice and equality by insisting that UEFA move their competitions away from Israel [and supporting] the cultural and sporting boycott and other forms of boycott, divestment and sanctions (BDS). [These] were vital in the fall of the South African apartheid regime, and similar initiatives will be vital to ending Israeli apartheid.”

Ireland has a proud tradition of standing with the oppressed and against injustice; by cancelling this game the FAI would be honouring that legacy while also reflecting the views of the thousands of Irish people who support the Palestinian struggle. We call on you to look deep into your conscience and cancel this game.