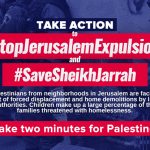 Over 1,500 Palestinians from neighbourhoods in occupied East Jerusalem are facing threat of forced displacement and home demolitions by Israeli authorities. Children make up a large percentage of the families threatened with homelessness.

This is part of Israel’s larger plan of racist colonial expansion throughout East Jerusalem and the West Bank, forcibly displacing Palestinian families from their land and homes and replacing them with illegal Israeli settlements.

“What we are witnessing in Sheikh Jarrah is Israel’s attempt to erase the Palestinian presence from our native city in real time,” says Mohammed El-Kurd, whose family is among those set to be forcefully evicted in May. “This fate of dispossession looms over much of my neighborhood. Our lives are consumed by the anxiety of living on the brink of homelessness.”

We are asking you to take two minutes to take two actions – each only requires a couple of clicks:

2. Click here to Write to US Sec. of State Tony Blinken and Defense Sec. Lloyd Austin 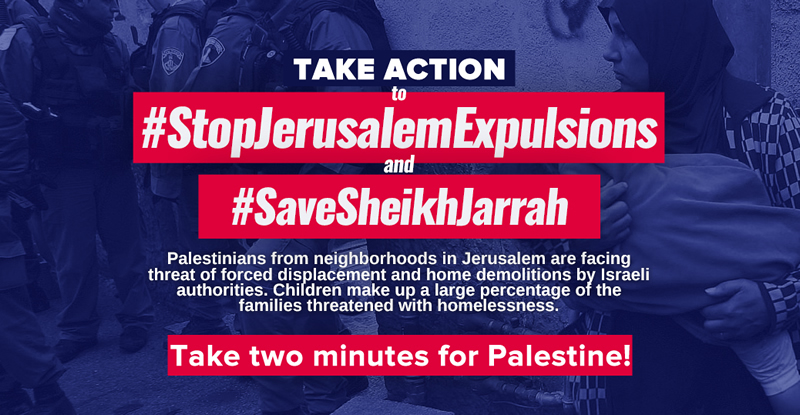 Write to Minister for Foreign Affairs, Simon Coveney demanding action from the Irish government to #SaveSheikhJarrah and #StopJerusalemEvictions