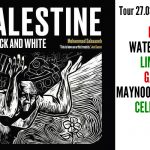 Between 27th March and 4th April the Ireland-Palestine Solidarity Campaign is honoured to host a speaking and exhibition tour with acclaimed Palestinian political cartoonist Mohammad Saba’aneh.