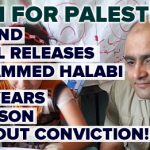 Mohammad was arrested on false allegations in June 2016 and is held in the notorious Ramon Prison in Israel. UN experts have called for his release.

I am calling on all friends of Palestine to participate in a Month of Action in January by sending the following letter to the Irish Government demanding action to secure my innocent son’s immediate release.

Our family, including Mohammed’s five young children, are desperate to have him free and home again. We have lost more than four years of loving family life together.