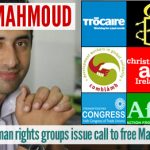 “Mr Nawajaa is a human rights defender and community leader who has been imprisoned solely for exercising his rights to freedom of expression and association. He is therefore a prisoner of conscience, and he must be immediately and unconditionally released.

Both the Irish Government and the EU must loudly echo this call for the release of Mr Nawajaa, and make it clear that Israel’s attacks against human rights defenders and others who criticise Israel’s occupation will not be tolerated.”

The letter, which you can read in full here, also calls for third states, including Ireland to, to act for Mahmoud’s release and to respect and protect the right of civil society actors to engage in BDS campaigning.

In the OPT, in Israel, and in the rest of the world – Ireland included – it is fundamental that BDS advocates are free to express their views and campaign without harassment, threats of prosecution or criminalisation, or other measures that violate the right to freedom of expression.