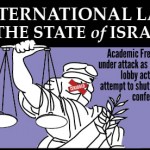 We would like to bring you news of an important conference entitled ‘International Law & the State of Israel: Legitimacy, Exceptionalism and Responsibility‘ set to take place in Cork between 31st March and 2nd April. We are asking for your support to ensure that this Conference will actually take place, as it is coming under severe pressure from those who would prefer that no critical academic discussion on the nature of the Israeli state, its foundation, its legacy, and its violations of international law and human rights abuses takes place. Period.

The conference is an important event with distinguished academic experts coming from all over the world taking part. This conference was prevented from taking place at Southampton University two years ago by the same pressure groups that are now busy trying to have it shut down in Ireland. It is endorsed by many famous and well-respected individuals, among them are: Archbishop Desmond Tutu, Ken Loach, Noam Chomsky, John Pilger, The Rt. Hon. Clare Short, Michael Mansfield QC, Judith Butler etc,.

The well organised backlash against the conference is something that should concern anyone who believes in free speech. Recent developments in some countries – particularly in the United States and the Britain – have evidenced a chilling repression of academic freedom when it comes to critique of Israeli State policy. This renders it all the more crucial to provide forums for such vital debate.

Currently, the most urgent need is to help counter the well-oiled pro-Apartheid, anti-Palestinian lobby machine which successfully had the same conference banned in the England. They are now trying to do the same thing here and are busy contacting key individuals at both venues to try and pressure them into cancelling.

Please take a few minutes out of your day to draft a polite email of support for the conference and send it to the following people:

It doesn’t have to be long, even a few lines supporting the conference will help. The following is an example of a brief email that can be sent – though it’s always better to compose your own short message of support:

I would like to convey my appreciation that, at the end of March, the City of Cork will be the venue for the important academic conference: International Law & the State of Israel.

As you may know, this conference has the high-profile, support of many well known and well respected figures who are celebrated for their belief in Fair Play and justice: Archbishop Desmond Tutu, Michael Mansfield QC, Clare Short, Dervla Murphy, Noam Chomsky, Ken Loach, John Pilger – and literally millions of, ordinary people across the world, a huge number of whom live in Ireland. We all want to see a peaceful and just resolution to the situation in the Palestine-Israel region based on international law and human rights.

It is revealing from the noxious response from those who do not want this subject discussed that they would prefer to keep the situation as it is, and out of sight from the world. Hiding behind false rhetoric of ‘balance’, it is clear that their real aim is to prevent any and all critiques of the Israeli state – historically or contemporarily.

No doubt your office will be flooded with emails, phonecalls, threats, harassment etc from those who wish to shut down any spaces where important and allegedly ‘controversial’ ideas regarding Palestine-Israel can be discussed, debated and critiqued. But I know that many, many more people will be proud that Ireland, and Cork specifically, can stand up to this small, but very vocal, crowd of anti-Palestinian bullies and will allow the conference to take place unhindered.

If you are on Twitter, please follow: @ConferenceCork and join the debate there where the conference is being ferociously attacked by professional Israel lobbyists, racist anti-Palestinian trolls and all sorts of apologists for Israeli Apartheid.

The conference will raise questions that link the suffering in historic Palestine to the manner of Israel’s foundation and its nature. It aims to generate a debate on legitimacy, exceptionalism and responsibility under international law as provoked by the nature of the Israeli State. It will also examine how international law could be deployed, expanded, and even re-imagined, in order to achieve peace and reconciliation based on justice.

You may have never before considered attending such a conference. But, if you are involved in political life, interested in current affairs, are part of the media, or just a curious observer – this three day, ground-breaking event will stimulate and inform:

If you would like to attend, you will need to register (cost €110 / €45 student rate) at https://israelpalestinelaw.com/registration/ The conference will be held at both City Hall and on the University College Cork campus over the weekend of 31 March – 2nd April 2017.