Watch: Videos from the Extraordinary Session of the Russell Tribunal on Palestine – Israel’s Crimes in Gaza during Operation Protective Edge 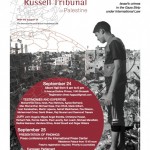 Last month the Russell Tribunal on Palestine held an extraordinary session of the Tribunal that looked into Israel’s Crimes (including War Crimes, Crimes against Humanity and the Crime of Genocide) during the “Operation Protective Edge” attack on Gaza, as well as third States complicity.

The jury will delivered findings on 25th September in the morning during an international press conference at the International Press Center (IPC, Brussels).