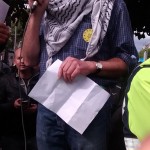 The Ireland-Palestine Solidarity Campaign chairperson Martin O’Quigley spoke at Saturday’s ‘Refugees Welcome’ demo in Dublin, demanding that EU governments do more for refugees, address root causes of the crisis and pressure Israeli to implement the ‪Right Of Return‬ for Palestinian refugees.

Martin O’Quigley, Chairperson of the Ireland-Palestine Solidairty Campaign spoke at the demonstration in solidarity with refugees and migrants in Dublin on Saturday 12th September 2015. Mr. O’Quigley was invited to speak about the situation facing Palestinian refugees in particular, having been denied their right of return to their homes by Israel for almost seven decades.

Many of those fleeing war, terror, repression and hardship in the Middle East and Africa are Palestinians – some are refugees for a second or third time. The Ireland-Palestine Solidarity Campaign is proud to endorse this demonstration calling on the Irish government to do more for refugees and migrants trying to reach Europe via dangerous journey in which thousands of people have died. In many cases either Western intervention, or Western indifference, has caused the crises which have led to the creation of the problems faced by these people. Therefore it’s not enough to merely take in those seeking better lives, the Irish government must seek to remedy the root causes, including supporting sanctions on Israel until it respects international law, ends it occupation of Palestine and allows the millions of Palestinian refugees to return to their homes, a right denied them for almost 70 years.