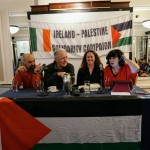 Note – there is a podcast of the event available here – the podcast includes the Q&A session with the audience, while the video does not.

Betty Purcell, who moderated the proceedings, is an Irish Human Rights and Equality Commissioner, freelance television producer and media consultant. Previously Betty worked as a Senior Television Producer with RTE and over 33 years has produced countless radio and television programmes. Betty has written a book on broadcasting Inside RTE (New Island, April 2014) and on Nicaragua Light After Darkness (Attic Press, 1987). In October 2015 Betty visited the West Bank on an olive harvesting trip.

Disclaimer: The views expressed in this video reflect the opinions of the speaker(s) only and do not reflect the views of the Ireland-Palestine Solidarity Campaign unless otherwise explicitly stated.