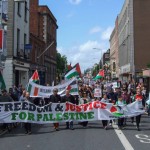 After fifty years of the occupation of the West Bank and Gaza, the situation for the Palestinian people has never been as bad. At least 60 Palestinians have been killed by Israeli occupation forces since the start of this year, many of them extra-judicially executed or shot during protests. Thousands have been injured. Hundreds of Palestinians, including children, have been imprisoned and likely tortured. Military raids on Palestinian communities occur every day and night, as do attacks by illegal Israeli settlers.

People in Gaza are facing into another winter under Israel’s cruel and illegal siege living, while fishermen and farmers trying to eke out a living are being shot and harassed by the Israeli military. In August a UN report stated that “with electricity at only 2 hours a day and youth unemployment at 60%, the ‘unliveability’ threshold has been passed”.

Millions of Palestinian refugees – denied their UN mandated right of return by the Israeli state  – continue to carve out an precarious existence in refugee camps in the Middle East. The civil war in Syria, has seen many become refugees for a second, and sometimes even a third, time.

The Israeli state is not just waging a war against the people of Palestine; since last year Israel and its allies’ attacks on Palestinian solidarity organisations have ramped up, with millions of dollars being pumped into sabotaging and shutting down the debate on Palestine and the struggle for Palestinian rights. In Ireland this has seen the Bank of Ireland unilaterally close the accounts of the IPSC (something we still haven’t received any explanation for), thus-far unsuccessful attempts by Israel lobby groups to shut down the space for academic debate, highly personalised and scurrilous attacks and smears on activists, and most recently the deportation by Israel of four Irish human rights activists on their way to visit occupied Palestine (not the first Irish activists to been subject to such deportations).

Despite all this Western governments, including our own, refuse to take action, and mainstream media outlets remain mostly silent. Israel is not held to account for its violations of international law and crimes against the Palestinian people. This impunity ensures that this appalling situation will continue.

The IPSC is proud to be part of the global, Palestinian-led Boycott, Divestment and Sanctions (BDS) movement, which aims to end Israel’s impunity and help ensure justice for Palestine. Dr. Omar Barghouti, co-founder of the BDS movement in Palestine has said that “the Ireland-Palestine Solidarity Campaign is doing excellent work”. But we need your help to continue this work!

The IPSC receives no state or corporate funding, we are an organisation that relies 100% on the generosity of our supporters, and without such support we cannot continue to exist.

For this reason we are appealing to our supporters to become regular contributor-members by donating on a monthly basis, via Bank Standing Order or PayPal. If just 100 of you donated €5 per month we could raise an extra €6,000 per year – allowing us to continue with our work in raising awareness about the situation in Palestine, promoting BDS, and crucially, being a part of the struggle against Israeli apartheid and for freedom, justice, equality and peace for the people of Palestine.

* You can DONATE VIA BANK STANDING ORDER by clicking here. [We prefer this option, as PayPal takes a cut of every transaction]

* You can DONATE VIA PAYPAL ONLINE by clicking here.

* You can also make a once-off donation by clicking here (PAYPAL) or here (BANK/CHEQUE) [but we ask you to please consider a regular donation].

We would also like to thank all those people who are already contributing on a regular basis; your ongoing support is greatly appreciated and has enabled us to carry out so much down the years – including the massive ‘Freedom & Justice for Palestine’ demonstration last June, David Cronin’s book tour next month, and our plan for a huge weekend conference on Palestinian Freedom next May to mark 70 years since the Nakba.