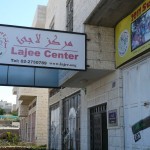 As a strong supporter of the work of the Lajee Center in Aida refugee camp in occupied Palestine, the Ireland-Palestine Solidarity Campaign is happy to publish below a report back from the centre’s latest summer volunteer work camp from an Irishman who took part.  The author would like to return to Aida in the future, therefore to reduce the risk of being denied re-entry by Israeli official, we have published this piece anonymously.

The Lajee Center’s 15th international summer camp brought over thirty volunteers to the Aida refugee camp in Bethlehem between the 27th of July and the 10th of August, 2015. The annual programme aims to provide participants with an understanding of the academic – legal, historical, economic, and humanitarian – dimensions of the occupation, delivered primarily through a series of talks and lectures. Furthermore, an understanding of the practical consequences of living under the occupation is shaped by meeting different Palestinian families and communities, who narrate their own economic, social and humanitarian experiences. This year’s programme also saw the volunteers work in Aida’s playground, learn conversational Arabic, play games with the camp’s children, and visit different refugee camps and cities across the West Bank.

Lajee is the Arabic for ‘refugee’ and the Center was set up in 2000 to “provide refugee youth with cultural, educational, social and developmental opportunities” in the Aida refugee camp. Opened in 1950 by the U.N. after the creation of the Israeli state forcibly displaced hundreds of Palestinian communities – known by Palestinians as the Nakba (‘catastrophe’ in Arabic) – today the Aida camp has a population of almost 5,000 people on a plot of land that has yet to expand in sixty-five years. The camp’s residents await the implementation of their international law-mandated Right of Return to their homes with the typical Palestinian combination of resistance and sumud, or ‘steadfastness’. The Lajee Center: Promoting resistance through education and empowerment

The Center’s cross-thematic work, which is oriented towards opening development paths for Aida’s youth, is delivered through a range of local, national and international platforms. Since the Center opened, its achievements include the establishment and development of the camp’s Dabka (a traditional Palestinian step dance) troupe that has toured across Europe, including a visit to Ireland in 2014. The Center has also been involved in the production of a play, written and performed by Aida residents, which informed the youth in the camp about Israeli prison conditions, interrogation tactics and their rights. Other notable achievements include the release of a series of books showcasing the ideas of the Center’s staff, and participation in cultural tours across the U.K. The Lajee Center’s work is undertaken and supported by the most inspirational, courageous, stoical and resilient team of volunteers and full-time staff members. A campaign of youth harassment by occupation forces

Aida is bordered on two sides by the Israel’s illegal separation wall, dividing Palestinians living in the West Bank from Jerusalem and the rest of Israel. Along Aida’s perimeter, the concrete in the separation wall is briefly disrupted by a dominant steel gate that provides an entry and exit route to an Israeli military training base, only metres from the camp; it is from here that the frequent army raids on Aida’s residents are ordered and launched.

One raid in February, captured on film by Mohammad Al-Azza, a filmmaker, photographer and Aida resident, shows almost one-hundred Israel Special Force soldiers enter and roam the camp’s streets (during the recording his camera was knocked to the ground after he was struck by a soldier) in what was claimed by observers to be a recently promoted army general asserting his newfound authority over his brigade, and Aida’s residents. During our time in Bethlehem, there were at least two raids on the camp by Israeli occupation forces that resulted in the arrest of a number of boys. One of these raids took place during the unrest that followed the murder of Ali Dawabsheh, an 18_month old baby, burned to death by illegal Israeli settlers in Duma (his father has since died, while his mother remains in a critical condition in hospital). Boys (from the age of 14) in custody must come before a judge within four days of arrest (for a settler this must be within 24 hours) who can then order a six-month interrogation period. In other cases, Palestinians may be held in administrative detention – a form of internment “without charge or trial that is authorized by administrative order rather than by judicial decree” under which both the individual in custody and their legal representative are barred from viewing the reason for detention and other minimum safeguards that exist in the judicial setting are removed.

In a perverse meshing of the ideology of occupation with commercial opportunism, Palestinians in the West Bank are faced with a bill for time spent in jail; 500 shekels (approximately €110) per month. Since 1967, around 800,000 Palestinian men – or 40% of the male population – have been detained at some point in their teenage and adults years. There is virtually no family in Palestine that has not seen at least one member arrested and jailed. Readers and activists can help the Lajee Center continue its important work in a number of ways: The entrance to the Lajee Center