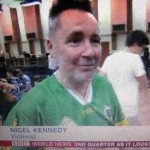 Violin virtuoso Nigel Kennedy has hit out at the BBC for planning to censor words spoken during a live broadcast of the Proms 2013 on August 8th on BBC Radio 3. For the BBC Four television rebroadcast, a line spoken by Kennedy is to be edited out. Along with The Palestine Strings, a group of young Palestinian musicians from the Edward Said National Conservatory of Music, Kennedy performed Vivaldi’s Four Seasons to rousing applause. At the end of the performance, Kennedy, who is a long-standing supporter of the Palestinian call for a cultural boycott of Israel, spoke to the audience the audience, saying: “Ladies and gentlemen, it’s a bit facile to say it but we all know from experiencing this night of music tonight that giving equality and getting rid of apartheid means there’s a chance for amazing things to happen” (click here for an MP3 recording). This is the line that will be edited out.

An online petition to the BBC is calling on the BBC to reverse the decision, and can be signed by any British TV License payer with a British postcode, including those in the north of Ireland. Click here to sign the petition.

With the BBC Four rebroadcast to air on 23rd August, an official statement was on behalf of Nigel Kennedy was posted on Facebook today by fellow violinist Yaron Stavi (as Mr. Kennedy does not use the internet). The statement reads as follows:

A spokesperson for Nigel Kennedy said:

Nigel Kennedy finds it incredible and quite frightening that in the 21st century it is still such an insurmountable problem to call things the way they are. He thinks that once we can all face issues for what they really are we can finally have a chance of finding solutions to problems such as human rights, equal rights and even, perhaps, free speech. His first reaction to the BBC’s censorship & imperial lack of impartiality was to refuse to play for an employer who is influenced by such dubious outside forces.

Mr Kennedy has, however, reminded himself that his main purpose is to provide the audience with the best music he can deliver. To withdraw his services would be akin to a taxi driver refusing to drive their customer due to their political incorrectness. He, therefore, is not withdrawing his services that he owes to his audience, but is half expecting to be replaced by someone deemed more suitable than him due to their surplus of opportunism and career aspirations.

Mr Kennedy is glad, however, that by censoring him the BBC has created such a huge platform for the discussion of its own impartiality, its respect (or lack of it) for free speech and for the discussion of the miserable apartheid forced on the Palestinian people by the Israeli government supported by so many governments from the outside world.

Mr Kennedy believes his very small statement during his concert was purely descriptive and not political whatsoever.

The incident is reminiscent of another incident when the BBC censored the words “Free Palestine” in a freestyle rap by Mic Righteous on the Charlie Sloth Hip Hop M1X in 2011, and indeed, is part of an overall BBC tendency of routinely excluding Palestinian and pro-Palestinian voices from broadcasts in recent years.