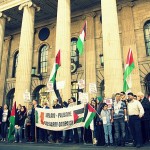 On the evening of Thursday April 9th 2015 a large number of members and supporters of the Ireland-Palestine Solidarity Campaign held a protest in solidarity with Palestinians being attacked in Yarmouk refugee camp in Syria, which had been overrun by ISIS fighters. It took place outside the GPO on O’Connell Street in Dublin.

The protest condemned in the strongest possible terms the barbaric and coldblooded takeover of the Yarmouk Palestinian refugee camp in Syrian capital Damascus by extremist Islamist militants ISIS, reportedly backed by the Al-Qaeda aligned al-Nusra Front. 100 people had been killed – with reports of an unspecified number having been beheaded. Meanwhile, the camp’s 18,000 civilians (including 3,500 children) slowly starve with reports that they are living on 400 calories a day, as the entry of humanitarian aid is blocked.

The shocking nature of life for the 18,000 Palestinian civilians caught in the camp has been described as “beyond inhumane’ by a UN official. Food, water and medicines are not reaching the camp, and people there are desperate and starving but unable to leave. It is a harsh prison for these innocent captives of ISIS, whose already difficult lives have been reduced to horror. A recent BBC News report from inside the camp showed the extent of the humanitarian crisis, with children and elderly people reduced to tears on screen, as they begged for their lives and for International aid.

The situation in Yarmouk is the latest consequence of the cruel abandonment of the Palestinian people by the international community. Forcibly driven from their homes and land during the Nakba which saw the creation of the state of Israel, the people in this camp have nowhere to go. They are caught between the Syrian government (which has reportedly used barrel bombs in the camp) and the onslaught of ISIS and others whose particular barbarity we have seen elsewhere.

Only a just peace for Palestine, with the right of dispossessed citizens to return, can bring a long-term solution for the region. The injustice perpetrated on the Palestinian people must end.

Read the leaflet we handed out by clicking here (PDF)

In her speech to the assembly, IPSC Vice-Chairperson Fatin Al Tamimi said (note, you can watch this in the video below):

We are here today to stand in solidarity with Palestinian refugees of Yarmouk camp in Syria. After living under a cruel siege imposed by both the Syrian state and rebel Syrian groups, after being caught in the middle of horrendous fighting between, after seeing the population of the camp drop from 180,000 to only 18,000 people, and after being starved, residents of the camp have now seen it being overrun with the forces of ISIS and their particular brand of brutality.

We are now seeing a siege within a siege in the camp. ISIS gangs, assisted by elements of the Al Qaeda-linked Nusra Front, have taken over most of the camp. Witness says that sniper fire from the roofs has killed fighters and civilians alike. The last remaining relief workers in the camp have been forced to flee, after several were killed and others kidnapped by ISIL. Meanwhile, Syrian state warplanes have added to the chaos by dropping horrendous barrel bombs. People are running out of food, but they can’t leave their houses because the situation is too unstable.

Palestinian refugees should not be caught up in this most brutal of civil wars in which more than two hundred thousand people have been killed. All sides in the conflict should observe the Geneva Conventions and International Humanitarian Law. Civilians are protected persons under Geneva and collective punishment is a crime. Those who wish to flee should be allowed to do so, and all sides should withdraw from the camp.

It is fitting that this protest is taking place today, 9th April. On this date 67 years ago, the Zionist terror gangs the Irgun and the Lehi attacked and overran the Palestinian village of Deir Yassin just outside Jerusalem. Over 100 Palestinians were massacred, mostly civilians including many women and children, and around 30 of these were executed after they had been taken prisoner. Houses were dynamited with people inside them, and according to one Zionist eyewitness, “The conquest of the village was carried out with great brutality, whole families [including] women, old people and children were killed and there are piles and piles of dead.”

Today, another massacre of Palestinians is taking place, this time of Palestinians in Yarmouk refugee camp, which has been overrun by the ISIS terror gang. Ironically, it was events like Deir Yassin that led to Palestinian refugees fleeing to camps like Yarmouk in the first place.

The only way to ensure the safety of Palestinian refugees – whether they are in Yarmouk, elsewhere in Syria, in Lebanon, Jordan or anywhere else – is to ensure they are allowed go back to the homes they were expelled from by Israel. The international community must force Israel to grant Palestinian refugees their Right of Return which is guaranteed by international law.

Nina Ajamia, a Palestinian from Dheisheh refugee camp in Bethlehem no living in Ireland read a poem about the Palestinian right of return entitled Palestine Will Be Free. The poem was written by Maher Zain.