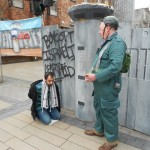 On Saturday March 10th the IPSC’s ‘CRH and the Israeli Apartheid Wall Roadshow’ came to Limerick for a street theatre event.  Members of the Limerick branch of the IPSC, as well as colleagues from the Dublin branch and friends from Clare and Galway, participated in the colourful event which attracted much attention from Limerick people.

The street theatre event was designed to raise awareness of Irish company Cement Roadstone Holdings’ complicity in the building of the apartheid wall, declared illegal by the International Court of Justice in 2004.  Hundreds of people signed a petition calling on: “CRH plc, to respect the human rights of the Palestinian people by divesting their 25% share of Israel’s sole cement producer, Nesher Cement Enterprises. This cement is being extensively used in the construction of the illegal West Bank wall and the massive expansion of illegal settlements in the occupied territories of Palestine.  These activities are illegal under international law.”

Passersby in the city were treated to a very effective piece of street theatre as a checkpoint at Bethlehem was re-enacted with an Israeli soldier and a Palestinian man being prevented from passing through the checkpoint. Indeed for Saed Laham, a Palestinian man living in Limerick, this was an all too familiar scene to him as he is from Bethlehem and, like all Palestinians, has had much experience of the brutality and injustice of the Israeli occupation of his country. These scenes attracted much comment and elicited a lot of interest in Limerick with people expressing dismay at the plight of the Palestinian people and disgust that an Irish company is party to such human rights abuses.

We were lucky; we folded up the apartheid wall at the end of the day and went home to normality. But for Palestinians the events portrayed are their daily reality. Let us hope CRH listens to the Irish people, finds some conscience and divests from it’s Israeli interests.