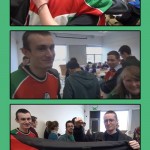 The Ireland-Palestine Solidarity Campaign (IPSC) has welcomed the passing of motion calling on the National University of Galway (NUIG) Students’ Union to actively participate in the Palestinian-led Boycott, Divestment and Sanctions campaign against Israel until it ends the occupation of Palestine and complies with its obligations under international law.
yo
The motion, which reads in full “That NUI Galway Students’ Union actively supports the campaign of Boycott, Divestment and Sanctions against the State of Israel.” was passed by an almost  2 to 1 margin (1,954 to 1,054 votes) during a student referendum held on March 6th. NUIG Students’ Union becomes the first student’s union in Ireland to adopt such a motion in support of Palestinian rights, and joins campuses all over the world in rejecting Israeli Apartheid.

Chairperson of the IPSC, Martin O’Quigley, welcomed the motion saying, “This is an historic victory for those who stand in solidarity with Palestinians living under the heel of Israel’s racist, apartheid system of occupation and colonisation. The IPSC salutes all those students who stood with the oppressed on the right side of history and endorsed this measure, despite a stream of venomous anti-Palestinian propaganda and dirty tricks being injected into the debate from off-campus forces, including the Israeli Embassy in Ireland’s failed attempts at using social media to influence the outcome.”

“Particular credit is due to the NUIG Palestine Solidarity Society whose hard work lay behind the tabling and passing of the motion. We hope other universities and ITs in Ireland will now follow suit in establishing such Palestine solidarity societies and seeking to table similar motions. We cannot think of a better way to round off this year’s Israeli Apartheid Week in Ireland,” Mr O’Quigley said.

Fionnghuala Nic Roibeaird, Auditor of the NUIG PSS, said in a statement: “This is a landmark victory in Ireland for the growing international campaign to boycott Israel until it complies with international law and ends its illegal occupation of Palestine, and no doubt NUIG SU is just the first of many SUs in Ireland to endorse such a campaign.”

“NUIG Students decided that, in the footsteps of the successful international boycott campaign against South Africa’s apartheid regime in the past, we will not be silent towards international racism and colonialism in our own time. Alongside promoting awareness of the BDS movement more broadly, NUI Galway SU will now stand unambiguously against instances of institutional collusion between NUI Galway and Israeli oppression, such as NUI Galway’s use of G4S, the international security company notorious for its provision of security and incarceration ‘services’ to Israel’s inhumane prison regime,” Ms Nic Roibeaird said.

The global movement for a campaign of Boycott, Divestment and Sanctions (BDS) against Israel until it complies with international law and Palestinian rights was initiated by Palestinian civil society in 2005, and is coordinated by the Palestinian BDS National Committee (BNC), established in 2007. BDS is a strategy that allows people of conscience to play an effective role in the Palestinian struggle for justice.

The BDS campaign is shaped by a rights-based approach and highlights the three broad sections of the Palestinian people: the refugees, those under military occupation in the West Bank and Gaza Strip, and Palestinians in Israel. The call urges various forms of boycott against Israel until it meets its obligations under international law by:

The BDS call is endorsed by over 200 Palestinian political parties, civil society and church groups, trade unions and movements. The signatories represent the refugees, Palestinians in the occupied Palestinian territories, and Palestinian citizens of Israel.

This vote follows on from the Teachers Union of Ireland’s 2013 endorsement of an academic boycott of Israel, and the recent launch of a pledge by Academics for Palestine signed by over 150 academics who will not “engage in any professional association with Israeli academic, research and state institutions and with those representing these institutions, until such time as Israel complies with international law and universal principles of human rights”.