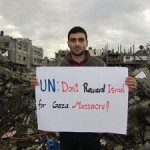 Take action: Tell the UN: Don’t reward Israel for Gaza massacre – it only takes one minute!

But studies show that at least 45% of the aid pledged by international donors will go to the Israeli economy.

The companies that are set to rake in profits providing materials for the reconstruction of Gaza are corporate criminals. Companies like Nesher (1/4 owned by Irish cement multinational CRH) and ReadyMix pillage Palestinian natural resources and participate in the construction of illegal settlements.

It is time the UN feel the extent of public outcry as details emerge of the UN’s complicity in keeping Gaza under siege and the ways in which Israeli companies will profit from the reconstruction of Gaza.

Take action now and send a message to key UN officials urging them to stop Israel from profiting from Gaza’s destruction and to adopt a procurement policy that exclude corporate criminals from tenders for Gaza reconstruction.

On behalf of The Palestinian BDS National Committee

P.S. If you live in Europe, please also visit freepalestine.eu to take action to demand that the EU suspends the EU-Israel Association Agreement, the free trade agreement that allows Israel access to EU markets and programs.