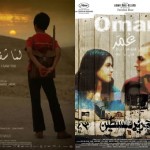 From 30th May to 11th June the award winning and Oscar nominated ‘Omar’ is showing in the Lighthouse Cinema, Smithfield, Dublin 8. See here for screening times and booking information.

Omar tells the story of a sensitive young baker who is accustomed to dodging surveillance bullets when he daily crosses the separation wall to visit Nadia, his secret love. But occupied Palestine knows neither simple love nor clear-cut war. To prove himself to Nadia’s family, Omar becomes a freedom fighter and must soon face painful choices about life and manhood. When he is captured after a deadly act of resistance, he falls into a cat-and-mouse game with the military police.

From 6th-12th June the award winning ‘When I Saw You’ is showing in the Irish Film Institute, Temple Bar, Dublin 2. See here for screening times and booking information.

In the political upheavals of 1967, thousands of refugees cross the border into Jordan to escape the conflict in Palestine. Ghaydaa and her young son Tarek are among them, having been separated from Tarek’s father in the chaos. Passing time in primitive camps, waiting on a return to his homeland and a reunion with his father proves frustrating for impatient, intelligent Tarek, and he runs away, only to be taken into an encampment of combatants in training, determined to fight for their freedom.

The second feature from director Annemarie Jacir bristles with political indignation, yet its main focus is the very humane and honest story of a young boy whose understanding of a cruel adult world is beyond him. In his first on-screen role, Mahmoud Asfa, who was just 13 years old when the film was made, gives a wonderful performance at the centre of the film.