Tue 28 June: Demo in support of Irish Ship To Gaza and the Freedom Flotilla 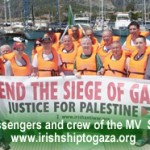 This Tuesday 28th June a demonstration will be held in Dublin in support of the Irish Ship To Gaza and the Gaza Freedom Flotilla. The demonstration, which begins at 6pm at the Central Bank Plaza on Dame Street, will call for an end to Israel’s illegal five-year siege of  Gaza and for the Flotilla’s safe passage. It will then march to the Israeli Embassy in Ballsbridge. There will be a live phone link-up to  the Irish boat MV Saoirse, along with high profile speakers and music plus a stop off at the Gaeity Theatre to link up with the ‘Don’t Dance for Israeli Apartheid’ protest at Riverdance’s opening night (see  NOTES below for full details of speakers etc).

On Tuesday, the 10 boats comprising ‘Freedom Flotilla 2 – Stay Human’ are scheduled to rendezvous in international waters and embark on the final leg of their peaceful humanitarian mission to Gaza. The MV Saoirse, which will form part of this flotilla, was paid for by the contributions of thousands of ordinary people and civil society organisations from all over Ireland, and 25 Irish citizens will be  aboard.

Speaking about the demonstration, Irish Ship To Gaza spokesperson Claudia Saba said: “We have called this demonstration to stand in solidarity with the 1.5 million besieged people of Gaza and all those who are taking part in Freedom Flotilla Two. We are encouraging people to take to the streets to show their support for this important civil society initiative to break the illegal Israel blockade of Gaza. Last year Israeli commandos violently intercepted a similar flotilla in international waters. This murderous attack left 9 passengers dead and many others injured. It is therefore extremely important that we are on the streets this Tuesday to demand that no repetition of this assault occurs and that the flotilla be allowed safe passage to Gaza. We are also asking the Irish government to demand the same.” Speaking from the MV Saoirse’s berthing point, ISTG National Coordinator Fintan Lane, who will take part in the Flotilla, said: “Israel’s illegal and inhuman siege has now entered its fifth year. This blockade has caused untold suffering and misery for the people of Gaza. According to the International Committee of the Red Cross it constitutes collective punishment, while the UN reported in March of  this year that Gaza was suffering a protracted human dignity crisis with grave humanitarian consequences. It is with this in mind that we, the Freedom Flotilla participants from many nations, set sail for Gaza  to affirm the right of the Palestinian people to unimpeded access to international waters and air space, in conformity with international law and all United Nations resolutions. We ask people of all nations  to demonstrate in support of the Flotilla and to call for an end to the blockade and its disastrous consequences.”

· The demonstration has been called by the Irish Ship To Gaza Campaign  (ISTG) and is supported by ICTU Trade Union Friends of Palestine, the Free Gaza Movement in Ireland, the Ireland Palestine Solidarity
Campaign, the Irish Anti-War Movement and the Palestinian Rights Institute.

· The Ireland-Palestine Solidarity Campaign has organised a ‘Don’t Dance for Israeli Apartheid’ protest outside Riverdance’s opening night performance in the Gaeity Theatre on South King Street. The protest, which begins at 6pm, is in opposition to Riverdance’s planned performances in Israel this September, and forms part of the international Cultural Boycott of Israel campaign which has seen many stars such as Elvis Costello, Carlos Santana, Christy Moore and Damien  Dempsey refuse to perform in Israel. The ISTG demo will link up with this protest and continue to the Israeli Embassy.

· Confirmed speakers for the ISTG demonstration are:

Plus a live link-up to the Irish ship the MV Saoirse and music by Irish rapper Captain Moonlight.