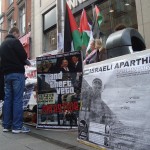 To all IPSC members and supporters,

As 2012 draws to a close, we would like to take this opportunity to thank you  for your ongoing support for Palestinian rights throughout the past year. In 2012 Palestinians have continued the struggle for their human and political rights, whether through prisoner hunger strikes, the civil resistance campaigns in West Bank villages or the campaign for boycott, divestment and sanctions. Thanks to  your help, we have continued to raise awareness and support the struggle for freedom, justice and equality for the Palestinian people.

It has not been an easy year for Palestine. In December, Israel responded to the successful Palestinian bid to be an observer state at the UN by announcing a programme of illegal settlement building which would definitively divide the West Bank into two. 2012 was especially grim for the people of Gaza who, as well as enduring the ongoing illegal Israeli siege, were also subjected to a terrifying week-long bombing campaign in November which killed over 150 people. Our deepest sympathies are with all those who have died or suffered this year, and also with their friends and family.

In response, the IPSC has maintained – thanks to your support – our active and creative campaigning in support of Palestine. Highlights of the year were the tours by Palestinian parliamentarian in Israel, Haneen Zoabi (who has just been banned from running in the 2013 Israeli elections), and by the Palestinian performance poets Remi Kanazi and Rafeef Ziadah (the latter joined by musical artists Terez Sliman, Phil Monsour and Yazin) with their electrifying performances and staunch support for a full boycott of Israel. In the coming year, one of our priorities is to repeat these successes and bring more Palestinian voices to Ireland.

In addition, our regular awareness raising activities have continued with street stalls, commemorative events such as those on Nakba Day, Land Day and Prisoners’ Day, participation in Israeli Apartheid Week, and film screenings.

Following the ‘CRH and the Israeli Apartheid Wall Roadshow’ across the country, the IPSC presented a petition at the CRH Annual General Meeting calling on the company to divest from its Israeli business interests which are involved in building the illegal wall and settlements in Palestine. Two Palestinian women made impassioned pleas from the floor asking CRH to heed the 10,000 signature strong petition calling for CRH to “Stop Cementing Misery in Palestine“, while outside the AGM campaigners spelled out the same message in huge letters along the road.

We also held events in solidarity with the Palestinian prisoners’ hunger strikes and, during Israel’s bombing of Gaza, managed to effectively mobilise people around the country to demand an end to the attacks. Equally importantly, during the Israeli attack we were the main media voice in this country to successfully counter Israeli propaganda.

Our effectiveness can be seen by the growing attacks made on us by the Israeli embassy in Ireland and by their supporters. We’re happy to report that these efforts to derail the boycott campaign in Ireland have been unsuccessful and our ‘Artists pledge to boycott Israel’ has over 230 signatures to date. More generally, support for boycotting Israel has become more mainstream, with a growing number of voices urging a boycott of good from illegal Israeli settlements. Next year, we aim to build on this momentum, and widen popular involvement in the boycott campaign throughout the country.

Sustaining such actions would not be possible without the help of our members and supporters. As 2012 draws to a close, and in 2013, we would ask you to continue this support, and help ensure that there is a strong and consistent voice in Ireland working for justice and for the human, national and political rights of all Palestinians.

There are several ways you can help:

·  set up a standing order