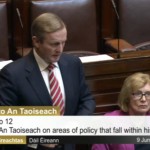 The Ireland-Palestine Solidarity Campaign (IPSC) today welcomed An Taoiseach [Irish Prime Minister] Enda Kenny’s statement that shocking anti-Palestinian statements by members of the new Israeli cabinet are “not part of a philosophy of a democratic government working to bring about peace”. However, the IPSC remains disappointed; despite this recognition of the true character of the Netanyahu administration, the Irish government continues to refuse to implement any meaningful sanctions on Israel thereby allowing it to continue acting with impunity towards Palestinians. By not implementing sanctions our government is tacitly permitting Israel’s commission of human rights and international law violations.

Responding to questions [full transcript here] by Richard Boyd Barrett TD in the Dail yesterday, the Taoiseach said that viciously anti-Palestinian statements made by members of the new Israeli government were “regrettable”, “most unhelpful” and “not part of a philosophy of a democratic government working to bring about peace”. In the same debate, the Leader of the Opposition, Micheál Martin TD said there is a “need for governments, including ours and others in the European Union, to take a far different line with the Israeli government from that which has been taken before now.”

IPSC Chairperson Martin O’Quigley welcomed the discussion, saying: that “The IPSC highlighted these, and many other, outrageous statements made by leading Israeli officials in a recent briefing paper issued to all public representatives and members of the Irish media. We are glad that these utterances, which illustrate the nature and intentions of the Israeli government, have been raised, discussed and condemned in Dail Eireann.

Mr. O’Quigley went on to express disappointment at inaction on behalf of the Irish government despite its opposition to such extremist statements saying, “however, the IPSC remains disappointed. Despite acknowledging the anti-peace and anti-international law agenda of the Israeli political and military leadership, the Irish government seems intent on carrying on with the same old policy of promoting negotiations that merely act as fig leaf for continued Israeli expansionism, occupation and war crimes. We agree with Deputy Martin that ‘a far different line with the Israeli Government’ is needed. Indeed, the equation is simple – this continued impunity equals ongoing atrocity. Yet, its negation is similarly straightforward – to end Israeli atrocities we must first end impunity.

Mr. O’Quigley continued by calling for government sanctions on Israel, saying that “what is required is immediate, concrete and meaningful action such as ending the Irish arms trade with Israel, a ban on the import of Israeli goods into Ireland, penalties for Irish and multinational companies like CRH and G4S that are complicit in the occupation, and for the Irish government to call for the suspension of EU-Israel Association (Euro-Med) Agreement. Ireland has supported international sanctions on many human rights abusing countries in the past, so why have we never supported even the mildest of sanctions against Israel?”

“Whatever the reason Israel is singled out for such special treatment, it is time to end this impunity. Israel must be held to account for it continuing crimes against the Palestinian people, and its human rights and international law violations. The concrete actions outlined above must be implemented, for, if they are not, in another one, two or three years’ time the world will be horrified by yet  another Israeli massacre as part of the ongoing destruction of the Palestinian people – and no one will be able to say they never saw it coming. Those who refuse to act now will be complicit by their inaction,” Mr. O’Quigley concluded.

– The IPSC briefing paper which features these, and other, statements from Israeli ministers is available here.

– A full transcript of the Dail debate is available here.