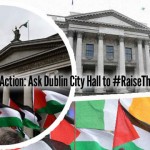 On March 30th the ‘Protocol Committee’ of Dublin City Council voted unanimously to fly the Palestinian flag from Dublin’s City Hall between 15 May and early June 2017, in what Ireland-Palestine Solidarity Campaign (IPSC) Chairperson Fatin Al Tamimi called “a heartening gesture of solidarity“. This historic decision was greeted with joy and appreciation by Palestinians in Ireland, in Palestine and in the diaspora. However, the decision has still to be ratified at the next full meeting of Dublin City Council which will be held on Monday 8th May – it is not a sure thing, and your help is needed!

An ‘orchestrated and sophisticated’ anti-Palestinian backlash

While such decisions that have been unanimously approved at committee level are usually ratified without incident by the full Council, the move has all too predictably sent the Israeli state and its anti-Palestinian lackeys in this country into fits of extreme rage.

The hasbara machine has kicked into gear, and Dublin City Councillors are now receiving messages in a highly coordinated fashion from as far afield as the US complaining about the decision to fly the Palestinian flag, accusing the council of the usual tropes, ‘antisemitism’, ‘support for terrorism’, ‘lacking understanding’ and so on ad nauseum. One Dublin City Councillor called the response “orchestrated and sophisticated”.

The official statement from Israel’s Foreign Ministry – headed suspected war criminal Benjamin Netanyahu himself – should be enough to indicate the level of nonsense being flung Councillors’ way: “If the Dublin municipality approves the decision, it will essentially be waving a white flag of surrender to terrorist organizations, hatred and extortion” a spokesperson said. It is quite clear that the Apartheid state of Israel and it’s apologists view any act of solidarity with the Palestinian people – a people who have suffered decades of brutal occupation, illegal colonisation and denial of their rights at this same state’s hands – as simply unacceptable. Indeed, the pro-Israel lobby has been busily trying to erode free speech rights all over the world when it comes to criticising the Israeli state, leading the US Center for Constitution Rights and other legal experts to coin the term ‘The Palestine Exception to Free Speech‘. The statement is also indicative of the utter contempt in which the Israeli state holds the Palestinian right to self-determination, and the Palestinian people’s struggle for their full rights as enshrined in international law.

Unfortunately, there is still a chance that pressure and/or threats from Israel lobbyists and the Israeli state itself will lead to some councillors deciding to vote against the ratification of the decision.

We are therefore asking our supporters, especially those who live in Dublin, to contact the Dublin City Councillors and express your support for the move and politely let them know that you hope they won’t bow to anti-Palestinian pressure from the Israeli Embassy or elsewhere. Below you will find email addresses for all 63 Dublin City Councillors – please take five minutes from your day to email them to ensure this historic gesture of solidarity is allowed to proceed, as it did in the Scottish councils of Glasgow, Fife, and West Dumbartonshire in 2014, and Dundee in 2010. We also provide a short model letter of support – but it is always better for people to write their own message, even if it is only a few lines long.

I am writing to commend Dublin City Council’s Protocol Committee for voting unanimously in favour of raising the Palestinian flag over Dublin City Hall next month in an important gesture of solidarity with the Palestinian people’s right to self-determination. I understand that this decision must now be ratified at the full council meeting on Monday 8th May, and I urge you to vote in favour of ratification.

As you are aware, Palestinians have suffered decades of human rights violations, colonisation and other crimes inflicted upon them by the state of Israel, which from even before it’s creation on 15th May 1948, has been ethnically cleansing indigenous Palestinians from their homeland, and denying refugees their right to return.  June 2017 will also mark the 50th year of Israel’s continuing and brutal occupation and illegal colonisation of the West Bank, East Jerusalem and Gaza – so it is both fitting and heartening that the City Hall should hoist and display the Palestinian flag during dates covering these anniversaries.

Social media shows that Palestinians have been jubilant at the news, and I’m sure your aware of the IPSC Chairperson Fatin Al Tamimi’s comments that the decision was “a heartening gesture of solidarity” and “truly soul-stirring and deeply emotional on a personal level.” And the message from BADIL Refugee Rights Resource Center which said the move was “highly appreciated by our people, especially refugee communities” and told of the Tamir, a 13 year old child from Aida refugee camp in Bethlehem, who exclaimed: “Wow! Imagine what would happen if all people around the world become like Irish people. We will get our freedom!”

In the absence of concrete and meaningful actions from the international community to hold the Israeli state state to account for its ongoing human rights and international law violations, this gesture of solidarity is the least we in Ireland can offer the Palestinian people; just as the Scottish councils of Glasgow, Fife, and West Dumbartonshire did in 2014, and Dundee in 2010.

Therefore I implore you to use your vote on May 8th the ensure that this decision of the Protocol Committee is ratified, and that the great and historic city of Dublin, which was so often the center of Ireland’s own struggle for freedom, justice and equality against a colonial power, will take pride in flying the flag of our Palestinian brothers and sisters who are still struggling for their own self-determination.