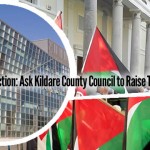 Kildare County Councillors will vote on Monday 29th May on a motion which will allow the Palestinian flag to be flown above the Council offices for a week in June.  Independent Cllr Joanne Pender has proposed a motion which acknowledges recent moves in the Dáil towards full recognition of the state of Palestine and asks Councillors to supporting flying the flag for a week in June to mark 50 years of occupation of the West Bank and Gaza.

The motion also references the 1,600 Palestinian prisoners incarcerated in Israeli jails who are on the sixth week of a hunger strike for better conditions. Kildare activists have had weekly vigils in Newbridge during the hunger strike and will continue in Maynooth this Friday (26th May).

The move follows recent decisions by Dublin City Council and Sligo, Donegal and Galway County Councils to fly the Palestinian flag as a gesture of solidarity.  Ms. Fatin Al-Tamimi, a Palestinian-Irish citizen whose family is originally from Hebron and Gaza in the occupied Palestinian territories and who is Chair of the Ireland Palestine Solidarity Committee said, “I’m sure I am echoing the views of all Palestinians in Ireland in saying that these gestures have been truly soul-stirring and deeply emotional on a personal level.”

Kildare Palestine Solidarity Campaign is asking people to contact their local representatives to indicate their support for the flag to be flown. Councillors are being asked to represent the many Kildare people who support justice and freedom for Palestine and who have had huge public support for their vigils for the Palestinian hunger strikers.

The motion will be voted on at the Council meeting on Monday 29th May.  The full motion reads: “Kildare County Council acknowledges and supports recent diplomatic moves from the Irish State towards full recognition of the state of Palestine. To mark the anniversary of Naksa in solidarity with the people of Palestine living under occupation and with the plight of the fifteen hundred prisoners who are currently on hunger strike, Kildare County Council agree to fly the Palestinian flag for one week.”

A backlash is expected

Dublin City Councillors reported an orchestrated and sophisticated campaign by the hasbara machine with most emails coming from outside Ireland. Emails accused the Council of the usual tropes, including ‘antisemitism’, ‘support for terrorism’, ‘lacking understanding’, fake ‘balance’ between oppressor and oppressed, and so on.  This is also expected to happen to Kildare County Councillors so it is important that action is taken to support the motion.

There is a risk that pressure from Israel lobbyists and the Israeli state itself will lead to some Councillors deciding to vote against the motion. We are therefore asking our supporters, especially those who live in Kildare, to contact the Councillors and express your support for the move and politely let them know that you hope they won’t bow to anti-Palestinian pressure from the Israeli Embassy or elsewhere. Below you will find email addresses for all Kildare County Councillors – please take five minutes from your day to email them to ensure this gesture of solidarity is allowed to proceed. We also provide a short model letter of support – but it is always better for people to write their own message, even if it is only a few lines long.

I am writing to indicate my support for Independent Cllr Joanne Pender’s motion to raise the Palestinian flag at Kildare County Council for a week in June in an important gesture of solidarity with its people on the 50th Anniversary of the Naksa and to support the 1,600 prisoners on hunger strike in Israeli jails. I understand that the motion will be debated on Monday 29th May and I urge you to vote in favour of it.

As you are aware, Palestinians have suffered decades of human rights violations, colonisation and other crimes inflicted upon them by the state of Israel, which from even before its creation on 15th May 1948, has been ethnically cleansing indigenous Palestinians from their homeland, and denying refugees their right to return.  June 2017 will mark the 50th year of Israel’s continuing and brutal occupation and illegal colonisation of the West Bank, East Jerusalem and Gaza – so it is both fitting and heartening that Kildare County Council should hoist and display the Palestinian flag at this time. As you know the Council has precedent for raising flags in solidarity, such as its fitting gesture to the LGBT community in June 2016 when the Pride flag was raised.

As I’m sure you are aware, your colleagues in Dublin City Council and Sligo, Donegal and Galway County Councils have already taken the decision to fly the flag at this time. Social media shows that Palestinians have been jubilant at the news, and IPSC Chairperson Fatin Al Tamimi has commented that the decision was “a heartening gesture of solidarity” and “truly soul-stirring and deeply emotional on a personal level.” And the message from BADIL Refugee Rights Resource Center which said the move was “highly appreciated by our people, especially refugee communities” and told of the Tamir, a 13 year old child from Aida refugee camp in Bethlehem, who exclaimed: “Wow! Imagine what would happen if all people around the world become like Irish people. We will get our freedom!”

Kildare Palestine Solidarity Campaign activists have received huge support over the last three weeks during their vigils in Newbridge drawing attention to the Palestinian hunger strikers. The vigils have been covered in all the local newspapers and on KFM and the public support has been overwhelming.

Therefore I implore you to use your vote on May 29th to reinforce that message of solidarity from the Irish people and put Kildare on the right side of history.