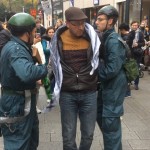 On Saturday 28th October 2017 members and supporters of the Ireland-Palestine Solidarity Campaign engaged in street theatre in Dublin’s Grafton Street shopping district. The action explored the experiences of Palestinian farmers during the olive harvest season, which is underway right now. The period always sees an uptick in the number of violent attacks on Palestinian farmers and their olive groves by illegal Israeli colonial settlers, backed up by the Israeli occupation forces.

Olive trees carry more than an economic significance in the lives of Palestinians. They are not just like any another trees, they are symbolic of Palestinians’ attachment to their land – their survival in the toughest conditions mirrors Palestinians’ own resistance and steadfastness. The fact that olive trees live and bear fruit for thousands of years is parallel to Palestinian history and continuity on the land.

The annual olive harvest is a key economic, social and cultural event for Palestinians, which brings families and communities together. In addition to their symbolic meaning, olives are a main source of income for around 80,000 Palestinian families. According to the UN , 45% of agricultural land in the West Bank and Gaza is planted with around 8 million olive trees. Olive trees account for 70% of fruit production in Palestine and contribute around 14% to the Palestinian economy. The olive oil industry provides about one quarter of the gross agricultural income in the Palestine and supports the livelihoods of approximately 100,000 families.

For all these reasons, olive trees are a favoured target of Israeli apartheid occupation regime, and its auxiliaries in the illegal settler movement. The Israeli state has uprooted over 800,000 olive trees since 1967, while settlers uproot, steal, burn or otherwise vandalise thousands of trees and saplings with complete impunity every year. Despite an descrease in attacks last year, there was a 65% reduction in yield from trees located on lands cuts off by the illegal Apartheid Wall. Settlers and soldiers also frequently assault Palestian farmers. Furthermore, according to the UN, “access restrictions … impede essential agricultural activities needed to plant or replant trees previously uprooted and maintain olive groves” which leads “to a negative impact on productivity and value”.