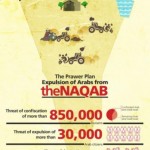 We in the Ireland-Palestine Solidarity Campaign are writing to bring to your attention the situation facing the Palestinian Bedouin citizens of Israel. The Israeli government is in the process of passing into law the so-called ‘Prawer Plan’. If implemented, the plan will see tens of thousands (estimates vary between 30,000 and 70,000) of Bedouin citizens forcibly displaced from their ancestral homelands in the Naqab (Negev) desert, and forced into a series of ‘Bedouin townships’. Were such an action to take place, it would be the largest act of ethnic cleansing carried out by the Israeli state since 1967. The plan has been condemned by international and local human rights groups, the EU and UN bodies, including by the High Commissioner for Human Rights, Navi Pillay.

In May this year, the Israeli Knesset’s Ministerial Committee on Legislation approved the proposed “Law for the Regulation of Bedouin Settlement in the Negev – 2013” (The Prawer Plan). If enacted into law and implemented, the plan would forcibly displace tens of thousands of Palestinian Bedouin citizens of Israel living in the unrecognised villages in the Naqab desert in the south of the state. The Prawer Plan will dispossess the Bedouin of their property and historical rights to the land, destroy the social fabric of their communities, and condemn thousands of families to lives of poverty and chronic unemployment; the forced relocation to urban townships where social problems due to marginalisation are already rife will spell disaster for these people.

Under the current regime much of the Bedouin population of the Naqab live in 35 villages on ancestral land that constitutes less than 5% of the total area. The majority of these villages pre-date the 1948 establishment of the Israeli state, yet Israel refers to them as ‘unrecognised villages’. As the inhabitants are non-Jewish citizens, the state has chosen to treat them as ‘illegal communities’, denying them essential rights and services such as connection to the electric, water and transport networks, and refusing to provide medical, postal and educational services (contrast this with the treatment of illegal Israeli settlement in the West Bank – even ‘outposts’ illegal under Israeli law – which the government ensures are connected to basic services). Israel treats construction within Bedouin villages as illegal and regularly demolishes the homes of residents. One village, Al-Arakib, has been demolished more than fifty times.

Yet, despite these punitive and discriminatory policies, the Prawer Plan will mark a new low in the Israeli regime’s treatment of this Palestinian community – effectively destroying its independent existence, it will dispossess and corral its citizens into townships which constitute less than 1% of the area of the Naqab, thereby ending their traditional way of life.

Bedouin representatives have repeatedly attempted to engage the government in a dialogue about the plan, but have been rebuffed. They assert that the law and the policy that it embodies are based on false and discriminatory views of the Bedouin as trespassers on their land. The Prawer Plan ignores the fact that most of the Bedouin villages have existed in their present locations since before the establishment of the state of Israel, or were created when the Israeli government forcibly displaced the Arab-Bedouin to the Siyag region of the Naqab in the 1950s.

It is also important to remember that the forced relocation of the Naqab Bedouin is part of a larger Israeli plan to minimise the amount of land lived on by Palestinians; including the ongoing efforts to ‘Judaize’ those areas of the Israeli state that have large numbers Palestinian Arab citizens resident in them, and the forcing of Palestinians in the occupied Palestinian territories into Bantustan-style ghettos surrounded by walls, settlements and military outposts with the aim of making life so unbearable that people will leave without being militarily expelled.

The Israeli Knesset approved the Prawer Plan on 24 June 2013. The bill will now be sent to the Committee for Interior Affairs and Environment to be prepared for the second and third readings.

A just and feasible solution first and foremost requires recognition that the Bedouin residents of unrecognised villages are equal citizens with equal rights. The unrecognised villages must be recognized and planned according to fair planning standards, and the land ownership rights of the Bedouin must be formally acknowledged by the state. The Prawer Plan – the ethnic cleansing of the Naqab – must not be allowed to take place. Nor should Israel be allowed to use the tentative peace talks with the Palestinian Authority as political cover to carry out this plan. As the Knesset has yet to approve and enact it as law, there is still time to act.

The Rome Statute of the International Criminal Court stipulates that “Deportation or forcible transfer of population” is a Crime Against Humanity, where “’Deportation or forcible transfer of population’ means forced displacement of the persons concerned by expulsion or other coercive acts from the area in which they are lawfully present, without grounds permitted under international law”. As the Negev Coexistence Forum for Civil Equality points out:

The Prawer Plan is dismissive of International Law concepts such as ‘transitional justice,’ ‘semi-nomadic property rights,’ and ‘native rights’—concepts that are very relevant to the relationship between Israeli authorities and the Bedouin population.  The Plan states that “as interesting and thought provoking as [discussing these concepts] is, they have not yet produced an applicable solution that fits with the economic, legal, social and political reality.”  The Negev Coexistence Forum (NCF) finds the ease with which the State absolves itself of responsibility to international standards and norms to be upsetting. NCF position maintains that if the principles of Universal Justice and International Law do not compare favourably with the social and political reality, it is the latter that must be in the wrong and should be amended.

Israel is seemingly ignoring international law that does not fit with its own particular view of the “economic, legal, social and political reality”, and thus this action, if it were allowed to take place, would potentially be a Crime Against Humanity, under the terms of the Rome Statute.

In the view of the Ireland-Palestine Solidarity Campaign, the Irish government should take immediate meaningful action to help stop this plan, including:

a)      abandoning this plan for large scale ethnic cleansing immediately;
b)      recognising and respecting the rights of its indigenous Palestinian Bedouin citizens.

–       Using its influence at European Union level to

a)      encourage fellow EU member states to take similar action
b)      call for the suspension of Israel from the Euro-Med preferential trade agreement of which this action is in breach; Article II of the  Agreement states it is “based on respect for human rights and democratic principles [in]  internal and international policy” and this respect “constitutes an essential element of this Agreement”.

The Irish government cannot sit idly by while this potential Crime Against Humanity, a Nakba in the Naqab, is allowed to take place. The IPSC would be happy to arrange a video-conference with a representative of the Naqab Bedouin in order for you to discuss the situation in more detail. Do not hesitate to contact us to arrange such a virtual meeting.