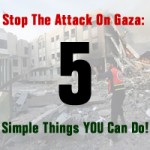 Israel is bombarding Gaza from air and sea. There is a rising death toll and fears that Israel is preparing to launch a ground invasion. The latest attack on Gaza, called ‘Operation Pillar of Cloud’ comes four years after the devastating ‘Operation Cast Lead’, in which Israel massacred over 1400 Palestinians. We can’t let it happen again!

Here are five very simple things you can do to help stop the Israeli assault on Gaza.

1. Email your public representatives and ask them to demand the Irish Government take action to end to the Israeli attacks. (Takes 1 minute)

2. Email or call the Minister for Foreign Affairs and demand the Irish Government take action to end to the Israeli attacks. (Takes 2 minutes)

3. Boycott Israeli Goods! Products exported from Israel such as diamonds, fruit, vegetables, cosmetics and plastics are frequently sold in Irish shops. If you see them don’t buy them. Even better, complain about their presence.

4. Get active in the Boycott, Divestment and Sanctions (BDS) movement. Come along to our events. Join the IPSC today.