The Israeli Municipality of Jerusalem and the Ministry of Transport are currently undertaking large-scale construction work in Beit Safafa, occupied East Jerusalem, in order to complete a highway (“Begin Highway”) that will serve the expansion of Israel’s illegal settlements in and around the southern part of occupied East Jerusalem and expedite the annexation de facto of the Gush Etzion settlement bloc. The occupied Palestinian population of Beit Safafa does not benefit from this highway which is being imposed on them against their will.

Although the highway is being built on land confiscated in the past from members of the community and passes through its center, no access road onto the highway will be available for the local Palestinian residents. Moreover, the highway is causing grave losses and damages to individuals and the community of Beit Safafa.

On Sunday, 26 January 2014, the Israeli Supreme Court sanctioned completion of the illegal section of the “Begin Highway” that cuts through the Palestinian community. Whereas, earlier on, the court had demanded substantive remedies to mitigate the damage caused for the inhabitants of Beit Safafa, it decided on Sunday that the Israeli Municipality of Jerusalem, the Ministry of Transport and the Moriah Development Company may now complete the six-lane extension without modification.

The court ruled, however, that a new detailed plan will be required to advance work on the 10-lane interchange that will connect the highway to Road 60 (Tunnel Road) leading to the Gush Etzion settlement bloc in the occupied West Bank.

Under international law, the Begin Highway currently under construction in Beit Safafa is illegal. Among others, Israel violates its obligations under the Fourth Geneva Convention by constructing a highway in the OPT which serves the permanent settlement of Israeli citizens in the OPT, and which does not benefit the occupied Palestinian population but rather the interests of its own citizens, including those in the illegal settlements. Moreover, since the section of the highway under construction in occupied Beit Safafa is part and parcel of Israel’s illegal settlement activity in the OPT, Israel, with the construction of this highway, is responsible for the serious breaches of international humanitarian and human rights law already analyzed in the ICJ Advisory Opinion of 2004 on the Israeli Wall in occupied Palestinian territory, including the permanent acquisition of territory by force, violation of the Palestinian right to self-determination, forced population transfer, unlawful expropriation and destruction of Palestinian property and gross and systematic infringements against the human rights of the occupied Palestinian population.1 Based on the ICJ Advisory Opinion and the recent UN Fact Finding Mission on the Israeli settlements, therefore, Israel with its Begin Highway extension in Beit Safafa is responsible for serious breaches of peremptory norms of international law which trigger the responsibility of all States, and for war crimes which give rise to individual responsibility.2

The Civic Coalition for Palestinian Rights in Jerusalem reiterates its appeal to:

TAKE ACTION! Send email to your MEP’s with demands to:

You can find a draft letter to MEPs here 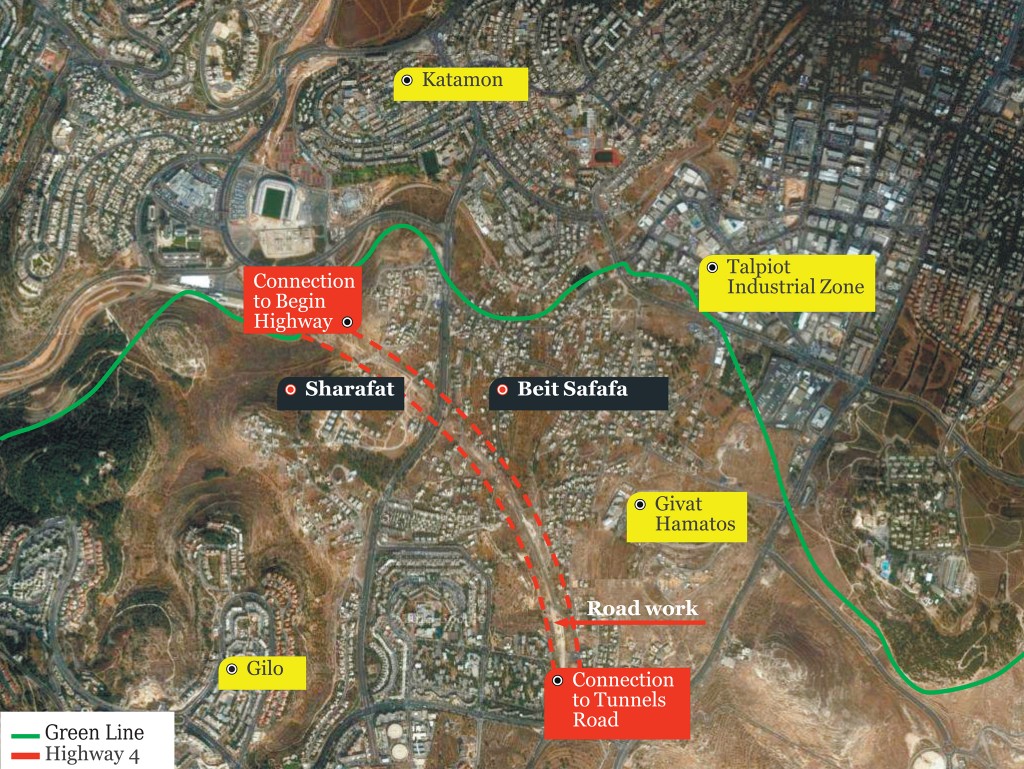 More information: The Civic Coalition for Palestinian Rights in Jerusalem

1 See, ICJ Advisory Opinion on the Legal Consequences of the Construction of a Wall in Occupied Palestinian Territory of 9 July 2004: http://www.icj-cij.org/docket/index.php?p1=3&p2=4&k=5a&case=131&code=mwp&p3=4

Originally published on the ECCP website on 10th February 2014.