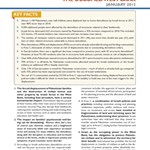 Below are some recently issued, and some leaked, reports on the Palestinian issue that will be of interest to our supporters.

6. Inter-Parliamentary Union report: “Parliamentarians under threat in many countries” (January 2012)