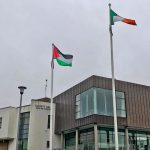 At its monthly meeting this week, Sligo County Council voted to call on RTÉ to boycott this years’ Eurovision Song Contest due to take place in Apartheid Israel.

The motion notes that “the Eurovision will be openly used for political and militaristic propaganda purposes” and to whitewash Israel’s “ongoing occupation of Palestinian lands, its continued building of illegal colonial settlements in violation of international law and its human rights abuses and war crimes.”

The motion, jointly moved by Cllrs. Declan Bree, Gino O’Boyle and Chris MacManus, was unanimously adopted at its meeting on Monday 1st April 2019.

Welcoming the motion, Ireland-Palestine Solidarity Campaign Chairperson Fatin Al Tamimi said: “Once again the elected representatives of the people of Sligo are to the forefront in supporting the rights of the Palestinian people. By calling for a boycott of the Eurovision in Apartheid Israel they have shown incredible solidarity with my people and our fight for freedom, justice and equality. We thank Councillors Bree, O’Boyle, MacManus and all who voted for this, and encourage other councils to pass similar motions ahead of the Eurovision.”

Sligo County Council has a history passing motions in support of the Palestinian people, including voting to fly the Palestinian flag from Council Officers for a month in 2017, voting to support Frances Black’s bill to ban goods from Israeli settlements in 2018, and in 2009 voting to end contracts with French multinational Veoila until it pulled out of illegal operations in the Occupied Palestinian Territories.

The Motion reads in full:

“Recognising Israel’s ongoing occupation of Palestinian lands, its continued building of illegal colonial settlements in violation of international law and its human rights abuses and war crimes as highlighted by the recent U.N. Commission of Inquiry into killings in Gaza;

Recognising that Israel’s hosting of the Eurovision will be openly used for political and militaristic propaganda purposes, including: the provision of free tickets to the Israeli military and serving soldiers; the intention to broadcast features that will attempt to normalise the illegal Israeli settlements; the building of the ‘Eurovision Village’ on a forcibly depopulated Palestinian area of Jaffa; and plans by the Israeli authorities in illegal settlements to provide free accommodation to Eurovision fans as a means of promoting tourism in these illegal zones.

Noting the call from Palestinian artists, broadcasters, journalists and civil society groups for an international boycott of the Eurovision 2019 in Israel as a means of indicating solidarity with the Palestinian struggle for freedom, justice and equality;

Noting the widespread Irish public support for a boycott;

This Council calls on RTÉ to boycott Eurovision 2019 as long as it is due to take place in Israel.”