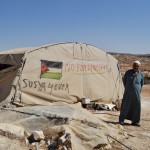 The Ireland-Palestine Solidarity Campaign sent the following letter to the Minister for Foreign Affairs and Trade, Charlies Flanagan TD, concerning the Israeli plan to demolish the Palestinian village of Susiya near Hebron, and forcibly relocate its Bedouin residents to Yatta.

We ask our supporters to themselves contact the Minister and ask that the Irish government speaks out against the plan, and takes action to stop both the demolition, and Israel’s ongoing violations of human rights and international law.

As we trust you are aware of the impending demolition by the state of Israel of the Palestinian village of Susiya, criticised by both the US and the EU, we call upon you to issue a statement on behalf of the Irish Government condemning the planned demolition and the forcible transfer its 340 residents.

The plans to demolish Susiya are impending even though a document issued late last week by the Israeli Defence Ministry’s Civil Administration, in charge of managing the occupied West Bank, and just published by the Israeli daily Haaretz, asserts that the village is situated on Palestinian land privately owned by local people. Despite this, Susiya residents require building permits in order to prevent the planned demolition, permits refused by the very same Civil Administration. This creates a circular situation according to which the residents cannot be forced to leave the village, even if the buildings are demolished.

According to the report in Haaretz, the Palestinian claims to the land are based on valid Ottoman documents from 1881, which however have not prevented the Civil Administration from demolishing buildings, tents and trees owned by Susiya residents, the Jabor family.

As you will be aware, Susiya is located in the South Hebron Hills near the town of Yatta. The village, home to 40 families, does not have a valid master expansion plan, and no building permits have been issued in the area. The request by Susiya residents for the Civil Administration to grant them building permits was rejected two years ago. The residents appealed to the Israeli High Court which postponed the hearing, and, following a recent petition by a right-wing group, the court has ruled in favour of demolishing the village.

The order by the Civil Administration to demolish the village’s so-called ‘illegal’structures earlier this month has met with opposition and pressure from the US government and the European Union, which has called on Israel to prevent the transfer of the village residents. Although at first denying the residents’ claims to ownership deeds covering an area of some 740 acres, the Civil Administration has now admitted to the deeds’ legality, even though the demolition plans still stand. The excuse given is that ‘the local people did not have sufficient funds for infrastructure or education, and that it would be preferable for them to move to nearby Yatta’.

The threatened demolition of Susiya is but one incidence of the ongoing ethnic cleansing of the Palestinian people by the state of Israel, and although Susiya has received international attention, many other villages have been demolished by Israel (for instance, the ‘unrecognised’ Bedouin village Al Araqib has been demolished 86 times since 2010).

The Ireland-Palestine Solidarity Campaign calls on the Irish government to express its opposition to the demolition of Susiya and the ongoing ethnic cleansing of Palestine in unequivocal terms.

We would also remind the Minister of our longstanding view that words alone – no matter how strong – are not enough to compel Israel to act in accordance with International Law. The Irish government must take serious, meaningful and concrete measure to apply pressure on Israel to ensure that Palestinians enjoy their full gamut of rights. It is time for the Irish government to apply sanctions on Israel.