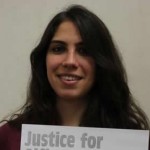 Riya Hassan is the Europe campaigns officer for the Palestine Boycott, Divestment and Sanctions National Committee (BNC), the largest coalition of Palestinian civil society organisations that works to lead and support the BDS movement internationally. Riya is a Palestinian activist raised in the southern village of Laquia in the Naqab (Negev) desert. She holds a degree in International relations and an MSc Middle Eastern politics.