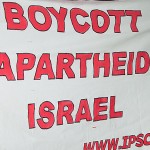 On the evening of Wednesday 18th January, the Ireland Palestine Solidarity Campaign (IPSC) held a protest against an official Israeli parliamentary visit to the Oireachtas. This visit of two Israeli Knesset [Parliament] members and their entourage was kept secret by the Irish state until the evening before the two MKs arrived. With less than 12 hours notice, the IPSC organised a protest of over 40 pro-Palestine activists outside the gates of the Dail to coincide with the MKs’ official meeting with the Irish Minister for Foreign Affairs and Trade and Tanaiste, Eamon Gilmore TD. The MKs were ushered in via a back entrance due to unspecified “security concerns”.

This visit, the highest profile Israeli state visit in over 25 years, was part of an ongoing attempt to normalise the abnormal, i.e., the apartheid policies of the Israeli state directed against the Palestinian people. Such visits – including the official welcomes by both the Dail and Seanad, along with high profile political meetings – serve only to legitimise Israel’s apartheid regime and associated breaches of international law. They portray serious and grave breaches of international law not as clear-cut issues where there are perpetrators and victims, but as disputed issues that are open for “debate between democratic countries”.

The IPSC, taking its cue from Palestinian civil society organisations, trade unions and churches, advocates a campaign of Boycott, Divestment and Sanctions (BDS) against Israel until it ends it occupation of Palestinian lands and complies fully with its obligations under international law. It was for this reason the IPSC organised this demonstration outside the Oireachtas.

How, if instead of punishing Israel for its crimes, it is essentially rewarded, can anyone be expected believe that its illegal actions will ever cease? There is no reason to compel it to do so, and thus it carries on knowing that aside from the occasional rhetorical reprimand from the international community, it can act with impunity. This is a situation that is both unacceptable and untenable, and it is well past time that the Irish government took a serious stand, backed up with meaningful action, to aid the Palestinian people in their struggle for their human, national and democratic rights.

This article is an extract from the IPSC’s Kevin Squires’ personal take on the visit and surrounding issues over on Irish Left Review.