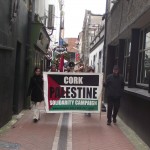 On Saturday the 31st March members of the IPSC Cork branch engaged in a demonstration to promote the BDS campaign among the public. Members of the IPSC group met in Grand Parade at 1pm with microphones, Palestinian flags, a banner and distributed leaflets to members of the public. The leaflets show the most commonly sold Israeli products and brands and can be used as a reminder when shopping in super-markets.

The demonstrators marched for approximately one hour following the usual itinerary through the streets of Cork city centre (Paul Street, French Church Street, Patrick Street – Oliver Plunkett Street) and stopped in front of the main supermarkets along the way: Tesco, Dunnes Store and  Marks & Spencer.

Throughout the march those demonstrating shouted slogans such as “Boycott Israeli products” and “Free Palestine” to accompany the words pronounced by the speaker, who explained to the public the necessity of supporting the Boycott campaign as a powerful economical weapon that could help in stopping Israel’s continued illegal occupation of the Palestinian territories and expropriation of Palestinian land, water and other natural resources.

The speaker also mentioned the most common Israeli products stocked on the supermarkets’ shelves, inviting the public to pay attention to the country of origin and to refuse buying these products if they come from Israel.

The other volunteers were involved in the distribution of leaflets and in face-to face conversation with the public.

The next demo is scheduled for the 28th of April, and also happening on the same day with by the Cork leg of the ‘CRH and the Israeli Apartheid Wall Roadshow‘. Words and images by Marianna F