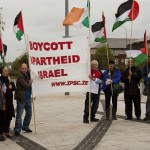 IPSC Chairperson Martin O’Quigley said: “Some say that sport and politics should not mix, however we say that sport and racism should never mix – hence the theme of our protest, ‘Love Football, Hate Apartheid’. The IPSC points to the sporting boycott against South Africa, which was one of the most effective tools employed in ostracising that state and revealing to the world its Apartheid regime and disregard for human rights.”

Mr O’Quigley pointed to the hardships facing Palestinian sportspeople, and contrasted it with the normality offered to their Israeli counterparts. Mr O’Quigley said: “While the Israeli team can travel and play freely, the Israeli government denies such basic everyday freedoms to the Palestinian women’s football team . The Palestinian women’s team needs to practice on concrete soccer pitches, since the only real soccer field in the West Bank is in Jericho, semi-inaccessible because of stringent Israeli military checkpoints. Women players from Gaza have not been able to leave the strip and play with the rest of the team for many years now. Travelling abroad is fraught with difficulties, with Israeli authorities regularly refusing visas to Palestinian female and male footballers alike. In 2005 the coach of the Palestinian women’s team resigned after being detained and interrogated for hours at the border by Israeli authorities; he found the experience too traumatic to repeat. Furthermore, iIn 2006 the football stadium in Gaza was bombed by the IDF.”

Below are some photos from the event, and you can download the leaflet that was distributed to fans by clicking here (PDF).