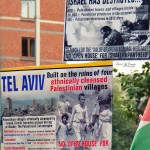 On a dark, cold and dreary evening in Dublin, members and supporters of the Ireland-Palestine Solidarity Campaign (IPSC) injected a little bit of lively colour into the twilight with a ‘Postcards for Palestine’ event. The event was organised at short notice to counteract an Israeli Embassy sponsored exhibition being launched in Dublin Civic Trust on Castle Street on Thursday 4th October inviting Dubliners to send postcards to Tel Aviv. The Israeli state sponsored event, shamefully held under the auspices of the Open House architectural festival, is the latest in a line of cultural propaganda events the state has recently staged in this country as part of their efforts to soft-peddle hasbara, whitewashng occupation, Apartheid and war crimes. Israel’s Foreign Affairs ministry has explicitly stated that it views “culture as a hasbara [propaganda] tool of the first rank” and does “not differentiate between hasbara and culture”. Scandalously, the event was officially launched by the Irish Minister for Education, Ruairi Quinn TD.

In response, the IPSC organised a ‘Postcards for Palestine’ event outside, to remind those attending that far from “emerging from the sand dunes” – as the Israeli Embassy invitation to the event proclaims – Tel Aviv itself is, in part, built over the remains of four Palestinian villages – Sheikh Muwannis, Jammusin, Salame and Summeil which were ethnically cleaned by Israeli-Zionist military forces in the 1948 Nakba (‘Catastrophe’), and that to this day, the Israeli state maintains a policy of home demolition and settlement building in the Occupied Palestinian Territories.

Aside from handing out hundreds of leaflets to passersby (click here to read leaflet in PDF), the IPSC invited people to write postcards of solidarity to refugee families from the four depopulated Palestinian villages, denied their right of return to their homeland. We collected scores of postcards, which will be scanned and put in an online exhibition to let the people of Sheikh Muwannis, Jammusin, Salame and Summeil know that their histories have not been forgotten. Several prominent Irish architects also published a letter in the Irish Times newspaper on the issue. Some of the postcards we collected

In particular, the IPSC was disappointed by Dublin Civic Trust’s facilitation of this event, given that its mission statement of “the recognition and protection of the city’s architectural heritage […] generating greater awareness of Dublin’s historic built environment […] taking cognisance of its past while embracing the future” stands totally at odds with allowing the Trust to be associated with an event sponsored by the Israeli state, considering Israel’s ruthless policy of social and architectural destruction.

In 1948, Israel was formed on the back of the ethnic cleansing of over 700,000 indigenous Palestinians involving the forced depopulation of 531 towns and villages, and 11 urban neighbourhoods. Subsequently, Israeli forces deliberately razed 70% of these areas to the ground; 22 % were “largely destroyed”; less than 2% were only slightly destroyed; less than 2% were taken over by Israeli settlers, and the status of the remaining 5% is undetermined.

Indeed, contrary to the Israeli Embassy’s claim (on the invitation to the ‘Postcards’ event) that Tel Aviv “emerged from the sand dunes”, the city is, in part, built over the remains of four Palestinian villages – Sheikh Muwannis, Jammusin, Salame and Summeil. Today only 4% of the city’s population are Palestinian. Israeli professor Moshe Zuckerman described it thus, “we destroyed a culture, destroyed life, destroyed education, destroyed what was here”. Nor is such destructive behaviour relegated to the past. Since 1967, Israel has demolished over 25,880 Palestinian structures in the occupied territories, not to mention massive assault on the civilian infrastructure of Gaza during the 2008-09 ‘Operation Cast Lead’ attack which also left over 1,400 people dead. As a result of the ongoing Israeli blockade of Gaza, which includes severe restrictions on the import of construction materials, Palestinians have found it incredibly difficult to reconstruct their society. At the same time, Israel continues to fund the construction of colonial settlements in the West Bank and East Jerusalem, a grave breach of the Fourth Geneva Convention and administers a system of military occupation Apartheid against Palestinians.

Furthermore, Palestinian citizens of Israel are the principal and disproportionate targets of evictions through the “gentrification” of historic Palestinian structures and districts in the mixed (Jewish & Arab) cities – nowhere is this more so evident than in Tel Aviv. While Tel Aviv makes claims for tolerance, in reality the discrimination against indigenous Palestinians in Tel Aviv is worse today than ever. Across large swathes of the city, an informal system of housing and other discrimination exists which would not be out of place in the Deep South of the US in the mid-50s. Furthermore, Bedouin Arabs in the Negev (Naqab) Desert are undergoing systematic forced relocation, with one village, al-Araqib, destroyed over three dozen times. Israel’s claims to pluralism also ring hollow. In 2009 the US State Department noted that Israel’s “1967 Protection of Holy Sites Law applies to holy sites of all religious groups within the country and in all of Jerusalem, but the Government implements regulations only for Jewish sites. Non-Jewish holy sites do not enjoy legal protection under it because the Government does not recognize them as official holy sites. At the end of 2008, there were 137 designated holy sites, all of which were Jewish. Furthermore, the Government has drafted regulations to identify, protect, and fund only Jewish holy sites. While well-known sites have de facto protection as a result of their international importance, many Muslim and Christian sites are neglected, inaccessible, or threatened by property developers and municipalities”.

Finally, while the invitation describes Tel Aviv as “UNESCO City of Architecture”, it is worth noting that Israel withdrew its funding for UNESCO in November 2011 after the organisation admitted Palestine as a member. So much for cultural tolerance!

That Dublin Civic Trust would play allow its premises to be utilised for, and Open House allow its name to be associated with, an event sponsored by a state with such an appalling record on human rights and lack of respect for Palestinian architectural, cultural and spatial heritage is unconscionable. By associating themselves with such an event, they are helping to legitimise these actions and buying into the propaganda of ‘Brand Israel’.