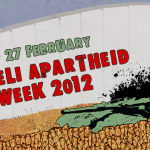 During the week of 20th to 27th February the Ireland Palestine Solidarity Campaign and other groups marked the 8th Annual Israeli Apartheid Week with a series of actions and awareness raising events in Dublin, Cork, Limerick, Galway and Belfast.

The IPSC was proud to present the Irish Premiere of the brand new film ‘Roadmap to Apartheid’, by film-makers Ana Nogueira & Eron Davidson,  a 90 minute documentary film looking at the current situation in Palestine through the lens of South African Apartheid; comparing the two regimes in a manner not flattering for the Israeli state. Narrated by US Civil Rights icon Alice Walker, and featuring interviews with many Palestinian, Israeli, South African and international activists, journalists and academics, the film was watched by over 60 people and received an ovation at the end.

The screening of ‘Roadmap to Apartheid’ was followed by a wide ranging discussion with Huwaida Arraf and Adam Shapiro, two of the founders of the International Solidarity Movement (ISM) which promotes non-violent resistance to Israeli Apartheid.

Read a full report, watch the film trailer and listen to audio of the discussion by clicking here.

During the talk, we received a message informing us that the Technical, Engineering & Electrical Union (TEEU) had just unanimously voted to endorse Apartheid Week, becoming the 19th Irish organisation to do so. The full list of endorsers is available at the end of this report.

The Queen’s University Belfast Palestine Solidarity Society held information stalls in the Students’ Union building on upcoming campaigns as well as information on Israeli Apartheid policies, recent events and the BDS campaign. According to one of those present at the stall, “over 400 [people] stopped by our stall to pick up materials and have a chat with us about what we were doing and whether we have any upcoming events which gave us the opportunity to engage in positive dialogue with those interested in the [situation with] Apartheid Israel”. More info here.

Between 1 and 2pm, the IPSC staged a small symbolic picket outside the offices of the European Union in Dublin. The protest was calling for an end to the EU’s disgraceful collusion with the Israeli Apartheid regime. Under the Euro-Med agreement, Israeli enjoys trade tariff benefits (the EU is Israel’s main export market), despite being in constant violation of that Agreement’s human rights clause. Furthermore, the IPSC was highlighting the role of Irish EU Commissioner Máire Geoghegan-Quinn, who, under the aegis of the FP7/Horizon 2020 program, is responsible for administering “scientific grants” to Israeli arms manufacturing companies and other Israeli businesses and institutions (including settlement-based Ahava), effectively amounting to rewarding Israeli for its terrorisation of the Palestinian people. As this event was coming to a close, IPSC activists were approached by a group of people who said they were from a “US PR firm”, who began questioning those present as to their motives for being there. However, it soon became clear that these people were the hasbara [propaganda] delegation sent to Ireland by the Israeli Ministry for Public Diplomacy. The mission, which saw 100 Israelis travel abroad as the “Many Faces of Israel”, aimed to counteract the growing effectiveness of Israeli Apartheid Week. Despite their protestations to the contrary, their ruse was rumbled when one of the activists present was able to identify by name one of the Israelis, Sari Diskind, who works in the office of the Israeli Prime Minister. Adam Briscoe, an Irish-US dual citizen, who was interviewed in the Sunday Times about the mission, was also identified. After about 15 minutes of pointless engagement with the Israeli propagandists, they left. Despite our offer to return the favour and turn up at one of their public events and debate them, they refused to tell us where they “appointment only” events were taking place.

Limerick: Limerick IPSC activists held an information stall for three hours, calling for a boycott of Israeli goods, with specific reference to Israeli Blood Diamonds. According to one of those who took part, “we received a very positive response generally from people. Everyone took leaflets and were interested in what Israeli goods to boycott. Some people noted the amount of Israeli goods on sale in the supermarkets with disgust and were also very interested in the blood diamonds angle as they weren’t aware of their importance to the Israeli economy.” Galway:  Members of the IPSC in Galway held a day long BDS awareness stall on Galway’s Shop Street, distributing leaflets with information about the boycott campaign and Israeli apartheid. According to one of the activists who manned that stall, “apart from one argumentative pro-Israeli man, who refused to recognise the Palestinians as a people, the response our stall received was overwhelmingly positive”. Cork: The Cork branch of the IPSC held their monthly street awareness campaign and march to call on members of the public to boycott Israeli products until Israel ends its occupation of Palestinian lands and abides by its obligations under International law. The march began at Daunt Square and from there headed to Patrick Street. Tesco, Dunnes Stores and Marks &Spencer all of which supply Israeli products were targeted. One member of the campaign spoke about Israel’s crimes against Palestinians and informed the public on the reasons why we should take a stand and join in the global BDS campaign. Participants on the march handed out information leaflets and considerable numbers of the public approached campaigners requesting information leaflets to give to their friends.

Dublin:The Dublin branch of the IPSC, supported by the Irish Anti War Movement  and  ICTU Trade Union Friends of Palestine, took to the Henry Street shopping district with a stall and a merry band of leafletters. Setting up outside Dunnes Stores (infamous for its role in the 1984-87 South African Anti-Apartheid strike by Dunnes’ workers), for over two hours they distributed thousands of leaflets with information about boycotting Israeli goods, and engaged with countless shoppers. You can read the leaflet here. During the action, which also saw a couple of speeches to the public and some chanting, the IPSC Chairperson Martin O’Quigley and Consumer Boycott Officer Conall Ó Dufaigh handed a letter of protest into the management of Dunnes Stores.

For the second day in a row, the IPSC was shadowed by the Israeli hasbara delegation, whose mission seemed to be to “lie, argue and fudge”. Unfortunately for the hasbaroids, they have no arguments of substance with which to actually argue. Lies, distortions, slander, putting words in peoples’ mouths and “what about-ery” were the order of the day as they read from the hasbara playbook. Clearly well trained (not to mention well groomed), they were called out by IPSC Cultural Liaison Officer Raymond Deane (video below).

Unbelievably, one of the hasbaroids even tried, unsuccessfully, to get the manager of Dunnes Stores to have the IPSC stall moved. It seems that they believe that – like the state they were here representing – they had the right to evict whomsoever they pleased. Eventually, after losing many arguments and being largely ignored by passersby, Team Hasbara left the area, while the IPSC continued engaging with a very receptive public. Indeed, it seemed as if the very presence of the hasbaroids was so off-putting to punters that they were making a point of coming up to the stall and signing the petition calling on CRH to divest from its Israeli interests that are involved in building the illegal Apartheid wall in Palestine (you can sign the petition online by clicking here). The Day of Action events marked the official end of Israeli Apartheid Week 2012 in Ireland. However, some members and supporters of the IPSC in University College Dublin (UCD) received an email from the International Students Society stating that students “interested in understanding and learning more about the non-political aspects of Israel, its culture and population to join us to meet them and talk [the hasbaroids], as well as exchange some of your own experiences with them”. We thought it only fair to go along to the event and “engage” with them. The event itself was sparsely attended: of the 30-odd people in the room,  about 9 were hasbaroids and their entourage; several ISS organisers; over a dozen pro-Palestinian human rights activists; and around 6 ‘neutrals’.

Despite the attempts to paint the event as ‘non-political’, it was quite clearly an attempt at whitewashing Israeli apartheid. As such, the discussion was dominated by questions from the pro-Palestinian audience members, and as on the streets in the days previous, the hasbaroids were unable to argue in any substantive manner, relying on falsehoods and half-truths. The IPSC was pleased to note that UCD was the only college in Ireland that had taken up their offer to “dialogue” with students. Indeed the rest of the hasbara tour was preaching to the converted with engagements hosted by Northern Ireland Friends of Israel and the Irish Christian Friends of Israel. Interestingly, the latter is an organisation that believes that “the Biblical truth that God gave the land of Israel to the Jewish people forever”, which under the Israeli government’s logic would place them well within the “one-state extremist” camp!

Endorsing organisations and groups for Israeli Apartheid Week 2012 include: