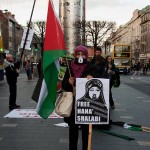 The Ireland-Palestine Solidarity Campaign marked International Women’s Day 2012 with a demonstration in Dublin city centre calling for the release of Palestinian hunger striker and political prisoner Hana’ Shalabi and celebrating women’s resistance to Israeli Apartheid and occupation. Independents  Maureen O’Sullivan TD and Senator David Norris stopped by during the action to show their solidarity.

Wearing locks over their mouths, solidarity activists assembled in the shadow of the Spire on O’Connell Street, and for two hours stood with banners, placards and leaflets (download PDF) calling for the release of Hana’ Shalabi, who was on the 22nd day of her hunger strike in protest against her internment without trial, and brutal and degrading treatment at the hands of the Israeli state. Prior to her current imprisonment, Hana had been detained by Israel for a two year period without charge or trial. She was released in October 2011 as part of the Palestinian-Israeli prisoner exchange. On 16 February 2012, she was again interned without trial. Upon arrival at Salem Detention Center, Hana’ was forcibly strip searched by a male soldier and again assaulted. Hana’ described her treatment as “utterly degrading”and subsequently began a hunger strike. However, Hana’s hunger strike, like that of her compatriot Khader Adnan before her, is not about herself. It is about justice. Also speaking at the event was Fatin Al Tamimi, a Palestinian photographer and activist, who paid tribute both to the resistance of Palestinian women, and women all over the world who have fought for a better world free from national, social and gender oppression.

The IPSC also released a statement marking this historic day, which noted that “on International Women’s Day 2012, and every day, the IPSC salutes the women of Palestine and their immeasurable contribution to their people’s struggle for human, national and political rights.” You can read the full statement online here. Earlier in the day, South Dublin County Council (SDCC) planted a tree in memory US human rights activist Rachel Corrie who was killed by the Israeli military in March 2003 trying to protect the home of a Palestinian family in Gaza. Councillors in SDCC passed a motion last year to commemorate her life and what she stood for. The tree was planted in Arboretum Corcagh Park in Clondalkin; a beautiful location, surrounded by the wonders of nature. Independent TD Maureen O'Sullivan stops by to show her solidarity